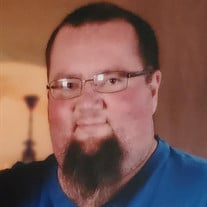 AJ Erikson, 47, of Dallas, Georgia, died on June 6th, 2021 at Cobb Wellstar Hospital in Austell, Georgia. Mr. Erikson enjoyed 24 years of his life with his loving wife Debbie, together raising their daughter Rebecca and son Anthony. AJ was born November 15th, 1973, in Teaneck, New Jersey. He graduated from Piedmont High School in Monroe, North Carolina, and earned a technical certification from ECPI University in Charlotte, North Carolina. He lived with his parents in Palisades Park, New Jersey; Oak Ridge, New Jersey; Ridgefield Park, New Jersey; and Indian Trail, North Carolina. He was married to Debbie on May 17th, 1997, living with his wife in Indian Trail, North Carolina; Matthews, North Carolina; Lithia Springs, Georgia; Charlotte, North Carolina; and finally, Dallas, Georgia. AJ is survived by his parents, Arthur Joel Erikson and Corinne Esther Erikson; his wife Debbie Bailey (49), his children Rebecca Nicole (22) and Anthony Joseph (18); his brother Peter (wife Megan, children Matthew, Sarah, Drew, and Noah); his brother Tim (wife Julie, children Eli, Cara Beth, and Daniel); and his brother David. AJ and Debbie lost their son Erik Clayton, who did not survive childbirth, in 2005. As a natural-born leader and go-getter, AJ was quickly promoted into IT management at Ticketmaster after graduating from ECPI. He rose to Sr IT Manager for the Southeast US. His hobbies were varied, and they included: collecting & dealing coins & sports cards; making “suds” in ASMR videos, collecting & assembling Lego sets; collecting & playing Monopoly (of many varieties), Pac-Man, Donkey Kong, Burger Time, and a slew of other video games. AJ loved his wife and children fiercely. He insisted on family outings and trips, and he always pushed for family reunions and inclusion of everyone. AJ was a devout & outspoken Christian. He never wavered in his faith and was “always prepared to give an answer to everyone who asked” for a reason for his hope in Christ. He had great compassion for children. Even as a teenager receiving medical treatments (for kidney failure and other conditions), his heart broke for the younger children receiving serious medical care alongside him. AJ’s most predominant trait was generosity. As a 10-year-old, he insisted on buying ice cream for his parents, grandparents, great-grandmother, and great aunt. Even when he started working as a young teenager, eager to put his industrious spirit to work (and to make money)—his generosity continued, as he shared his first paycheck with his brothers, and for the rest of his life never stopped sharing and blessing friends and family, while running side businesses out of his home, in addition to his full-time career. He also never stopped working nor playing. He was a hard-working kid at heart with a heart of gold. AJ will be dearly missed. AJ’s funeral service will be held at 2:00 pm on June 12th, 2021, at Heritage Funeral and Cremation Services, located at 3700 Forest Lawn Dr, Matthews NC 28104. Visitation will be held prior to the service from 1:00-2:00 pm. Burial will follow the service at Forest Lawn East Cemetery, across the street from the funeral home. The funeral service will be live streamed beginning at 1:50 PM from this site, to access the live stream service click the photos & videos tab.

The family of AJ Erikson created this Life Tributes page to make it easy to share your memories.

Send flowers to the Erikson family.