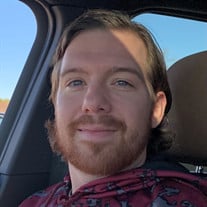 Florist of Choice: Monroe Florist - 704-283-2623 PLEASE REQUEST NO LILIES. Alex Sgueglia went to be with the Lord Jesus Christ on Jun 20th as a result of a cardiac event in his home. He was born in Charlotte, NC on June 10, 1993, and had just turned 28. Alex was currently a full-time college student at Sothern Illinois University taking summer school and approved to graduate in Dec 2021. He was currently on the Dean’s list. His bachelor’s in Aviation Maintenance Management was setting him up for a long career at an Aerospace firm. He would have been one of the few who held an FAA Airframe and Powerplant license as well as a bachelors in the same discipline. After accumulating valuable jet maintenance experience at three aerospace firms: Blue Hawaiian Helicopters, American Airlines, and Collins Aerospace, he vowed to “never turn a wrench again” and his goal of a white-collar management job was just months away. Alex was a very bright, but shy young man. He tried to hide his smile, but the best times his family had was when he had a big unabated smile brought on by some good news. He really shined in extemporaneous speeches and job interviews as he was able to recall facts and answer questions while formulating answers quickly, and without hesitating in his speaking. He recently finished a speech class receiving a “A” and his professor wrote him a lengthy atta-boy after posting his grade and wishing him luck. Alex was an excellent hand-to-eye athlete as well as an expert snow boarder, and skate boarder - two of his passions until his death. He recently returned from Maui, where he spent his semester break, surfing, and skateboarding. Maui held a special place in his heart having lived there almost two years. His first love though was the Carolinas. He had numerous “704” and “QC” Queen City decals and he was proud of his hometown. He was a huge Carolina Panthers football fan from birth and still took personally a horrible incomplete-pass call in the first quarter of Super Bowl 50 against the Bronco’s. Alex frequently spoke of having children but had not found the right woman yet. It was a long-time goal. Even when he was a middle schooler, he complained to his parents “I’ll never do that when I am a dad!” He spoke and thought about children often. He was an American patriot but also proud of his Italian dual citizenship and looked forward to children continuing that legacy. When not working out or studying, Alex favorite thing to do was watch James Bond movies with his loving brother Patrick. Alex is survived by his loving parents, James and Michelle Sgueglia, Charlotte, brother Patrick Sgueglia, Frankfurt, Germany, Paternal Grandfather V. James Sgueglia, Bluffton, SC, Maternal Grandfather Thomas McDermott, Nicholasville, KY, Aunts and Uncles Bridget Price (Bobby), Nicholasville, KY, Mike McDermott (Jamie)Georgetown, KY, Joe McDermott (Jennifer), Lawrenceburg, KY, Michael Sgueglia, Los Angeles, CA, Denise West (Todd), Fayetteville, AR, Patricia Sgueglia, Sarasota, FL, Mary Lopes, Huntersville, NC and Elizabeth Branconnier (Matt), North Providence, RI. In addition 12 cousins, Aubrey, Adam, Logan, Lucas, Joseph, Jordan, Caroline, Sterling, Hali, Mia, Oliver and Stella. Pall Bearers will be Alex’ longtime friends Dan Kinneer (Denver, CO), Matthew Immel (Indian Trail, NC), Rodes Smith (Lexington. KY), Logan McDermott (Lexington, KY), Drew Ryan (Chapel Hill, NC), Pax Sabates (Charlotte, NC) The family will receive visitors Sunday, June 27, 2-4 and 6-8 PM. Funeral Service Monday, June 28, 11 AM. All take place at Heritage Funeral Home and neighboring Forest Lawn East Cemetery, 3700 Forest Lawn Dr, Matthews, NC 28104. The family is honored to have Deacon Michael Alig from the Roman Catholic Diocese of Raleigh officiating. The family wishes to thank all who have reached out. It is greatly appreciated. In lieu of flowers please consider a gift to one of Alex favorite charities: The Skatepark Project https://skatepark.org Maui Memorial Medical Foundation https://www.mauihealth.org/foundation/ Recent development: Michael Burgener, Associate Professor and Chair Department of Aviation Technologies Southern Illinois University has announced that Alex will be awarded a Bachelor’s degree posthumously at Southern Illinois University. The family is forever grateful.

Florist of Choice: Monroe Florist - 704-283-2623 PLEASE REQUEST NO LILIES. Alex Sgueglia went to be with the Lord Jesus Christ on Jun 20th as a result of a cardiac event in his home. He was born in Charlotte, NC on June 10, 1993, and had... View Obituary & Service Information

The family of Alexander Thomas Sgueglia created this Life Tributes page to make it easy to share your memories.

Send flowers to the Sgueglia family.