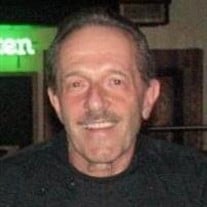 Alfred James Simonetti, age 78, of Charlotte passed away Tuesday, May 11, 2021. He was born September 16, 1942 in Brooklyn, NY to the late Alfred and Lucy Simonetti. He earned a Master’s Degree in Engineering from Polytechnic Institute, Brooklyn, NY. He was hired by IBM where he worked for 25 years; he was also involved with Project Management and Consulting with various companies for 29 years. Al always enjoyed spending time with his family and pets and having dinner with his good friends. His interests included home repair, exercising and bike riding. He liked singing in the shower and drinking his favorite Carlo Rossi Burgundy wine. He was also a member of the Charlotte Blues Society and the Italian Club. Al was a loving husband to his wife Mary Jane for 55 years and an amazing father to his two sons, Steven and Michael. In their early years Al, Mary Jane and Steven lived in Bellerose, NY then moved to Wappingers Falls, NY in 1970 where Michael was born. They relocated to Charlotte in 1979. Al would go out of his way to do anything for his family. He always enjoyed helping his boys with any and all projects, big or small. These projects ranged from electrical work to plumbing to anything else that needed attention. There was almost no task he could not do with ease and he lent his expert skills to everything he did. Sometimes the projects took a while to complete, but they were always done right! Al enjoyed music, quiet moments at home, dinners with Mary Jane and he would get together often with his sons for “boys’ nights” at restaurants or at Blues Society events. He also enjoyed star gazing with his son Michael. Al was a husband, father, brother, uncle and friend. He is survived by his wife of 55 years, Mary Jane Simonetti; son, Steven Simonetti and wife Colleen Simonetti of Charlotte, son Michael Simonetti of Charlotte; sister, Millicent Caporrino, and her husband Tony Caporrino and their two sons, of Plainview, NY; and sister-in-law, Loretta Alden of Poughkeepsie, NY. In lieu of flowers, donations can be made to the Humane Society of Charlotte, 2700 Toomey Avenue, Charlotte, NC 28203. Family is in the care of Heritage Funeral Home, Weddington Chapel.

Alfred James Simonetti, age 78, of Charlotte passed away Tuesday, May 11, 2021. He was born September 16, 1942 in Brooklyn, NY to the late Alfred and Lucy Simonetti. He earned a Master&#8217;s Degree in Engineering from Polytechnic Institute,... View Obituary & Service Information

The family of Alfred James Simonetti created this Life Tributes page to make it easy to share your memories.

Send flowers to the Simonetti family.