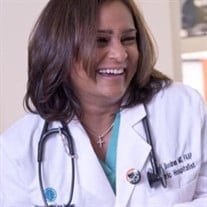 Written on behalf of the late Allyson Boodram by her family. We will miss you. ♥️ At age 47, Dr. Allyson Boodram passed away peacefully at home in Charlotte NC, in the company of loved ones, on January 31, 2022. This dedicated physician touched thousands of lives through her successful career as a pediatrician, and her infectious spirit captivated all our hearts. Without hesitation, she volunteered at ground zero on 9/11/2001 while completing her clinical rotations at Maimonides Medical Center, New York. Some 17 years later, in August 2018, she went into the urgent care for what she thought was a minor muscle injury, and unexpectedly learned that she had stage 4 lung cancer, related to her service during 9/11/2001. Allyson was born on June 13th, 1974 to Jasmine and Frankie Boodram in Port of Spain, Trinidad & Tobago. A Trinidadian at heart, her childhood was filled with ocean vacations, car racing, sharing curry duck and shark and bake with family, eating oysters and doubles from street vendors, whining (the dance) to soca music, and playing steel drums. She believed in miracles and had a special love for the magical creature, the unicorn. After completing her undergraduate degree at Florida International University, she attended St. George’s Medical School in Grenada where she sustained lifelong cherished friendships, many of whom are here today. She then completed her residency program at Riley Hospital for Children and later became a Pediatric Hospitalist at Community Health Network in Indiana. She lived in Indianapolis for 10 years, where she acquired her greatest love, “Jess Bug (the dog)” and the mischievous “Jack Nicholson (the cat)”. Allyson was joined by her sister, Sharlene in Indianapolis in 2006, and they shared the rest of their journey together. Driven by her passion to bring A class healthcare to underserved communities and fellow immigrants, Allyson moved to Charlotte, NC in 2016, where she started building Children’s Hospitalist Inpatient Program in Union County and served as Medical Director for several years. Allyson is survived by her parents Frankie and Jasmine Boodram, her siblings Franklyn, Sharon and Sharlene, and her nephew Fz. She was loved and adored by many friends with whom she formed forever friendships. Rest well sweet Allyson, doctor, daughter, sister, and friend. Visitation will be held on Thursday, February 3, 2022 from 1:30 PM until 2:00 PM with Mass of Christian Burial beginning at 2:00 PM at St. Peter Catholic Church, 507 S. Tryon Street, Charlotte, NC 28202. The service will be Livestreamed at https://boxcast.tv/view/funeral-mass-of-dr-allyson-boodram-rzmtpkvaemjjlqnfibq8 Heritage Funeral Home, Weddington Chapel is honored to be assisting the Boodram family during this time.

Written on behalf of the late Allyson Boodram by her family. We will miss you. &#9829;&#65039; At age 47, Dr. Allyson Boodram passed away peacefully at home in Charlotte NC, in the company of loved ones, on January 31, 2022. This dedicated... View Obituary & Service Information

The family of Dr. Allyson Boodram created this Life Tributes page to make it easy to share your memories.

Written on behalf of the late Allyson Boodram by her family....

Send flowers to the Boodram family.