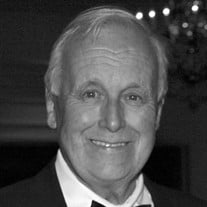 Anthony Graham Edwards February 6, 1936- October 7, 2021 Charlotte, North Carolina Anthony (Tony) Graham Edwards, 85, passed away peacefully at his home in south Charlotte on October 7, 2021. Tony was born on February 6, 1936 in London, England. He was the son of Reginald Samuel Edwards and Margaret Louise Edwards and brother to Keith Duncan Edwards. Reginald was part of the Eighth Brigade of the Third Infantry Division, British Army, who landed with the Canadians at Sword Beach, Normandy in France on June 7, 1944 as part of the liberation of Europe. World War II shaped Tony’s childhood. By his tenth birthday, he had lived through the blitz in London and had been evacuated to stay with family in both Wales and Cheshire, in north England, where he experienced V1 and V2 missile attacks. While at Kingston Grammar School in London, he was introduced to the sport of rowing, which became a lifelong passion. As a member of the London Rowing Club, he competed in Henley Royal Regatta and became a member of the Leander Club at Henley. He also served two years in the Royal Navy. Growing up, Tony’s wish was to see as much of the world as possible. As soon as he completed his military service, he began a 25-year career with Unilever where he lived and worked in the Democratic Republic of Congo, Ghana, Nigeria, Tanzania, South Africa and Kenya. From there he moved to the Caribbean where he was based in Trinidad. After that he moved to Caracas, Venezuela where he met his wife, Toler, who was vacationing in the region. They were married in Toler’s hometown of Asheboro, N.C. on July 19, 1969. Unilever transferred Tony and Toler to the Canary Islands in Spain and after that they moved back to England. For the next twenty years, he continued to travel globally for work and the family lived in various locations in England and in the U.S. before settling in Charlotte in 1993. Tony will be remembered for his work with the British American Business Association. He launched the British Studies Abroad program for Charlotte Mecklenburg high school students and during his 15 years of leadership of the program, they sponsored over 50 students to visit London every summer to learn about British culture and history. All those who knew Tony appreciated his sense of humor, curiosity, and love of people. The Edwards family would like to express their loving appreciation to Novant Health Hospice, particularly to his nurse, Dollie, who provided such great care. Tony is survived by his wife of 52 years, Toler Yates Edwards, and his son, Graham Edwards, and his wife, Joanna of Redondo Beach, Calif. and their three children, Charlotte, David and Grace; his daughter, Catherine Sanders and her husband Wallace of Bentonville, Ark. and their two children, Caroline and Lucy; and daughter Elizabeth Portnoy and her husband Jason, of Chapel Hill, N.C. and their three children, Ella, Ben and Pippa. Family members will be holding visitation in Charlotte at Calvary Church, 5801 Pineville-Matthews Road, Charlotte, NC 28226 on Monday, October 11 at 1pm followed by a memorial service in the sanctuary at 2pm (which will be livestreamed at https://live.calvarychurch.com). There will be a private burial for family at the Magnolia Garden, thereafter. In lieu of flowers, the family asks that donations be made to Novant Health Hospice, 324 N. McDowell St, Charlotte, NC 28204; to the Margaret Ferguson Scholarship Fund, c/o BABC Carolinas, PO Box 480661, Charlotte, NC 28269; or to Calvary Church, Charlotte, where he was a member. Arrangements are in the care of Heritage Funeral Home.

The family of Anthony Graham Edwards created this Life Tributes page to make it easy to share your memories.