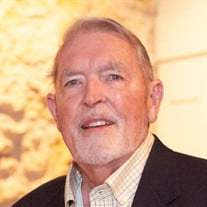 Banks Stacy Robinson June 25, 1937 – March 1, 2022 Banks Stacy Robinson, 84, passed away on March 1, 2022, after a brief illness brought on by covid. Stacy was born in Gaston County, North Carolina on June 25, 1937, to William Roy Robinson and the former Lida Ormand Stacy, both deceased. Stacy graduated from Gastonia High School in 1955 and on July 3rd married his high school sweetheart and the love of his life, Sherry Ann Rollins. They were married nearly 67 years at the time of his death. Stacy attended Davidson College, following in the footsteps of his father and older brother. After graduating with a BA in business in 1959, he began his career with the Insurance Company of North America (INA) (later CIGNA). He spent his career in South Carolina with a nine-year detour to New Jersey and finally returned to Charlotte where he retired after 40 years of service. Retirement could not stop him from working, as he and Sherry along with her two sisters and their spouses started a small antiques business which kept them occupied and entertained for 25 years. The “Sisters Three” name became well known in the area, especially after they began conducting estate sales. Stacy was a lifelong Presbyterian holding leadership positions in every church where he was a member as either a deacon or elder. He was active in Stephen Ministry, an outreach program. He accompanied church youth on foreign mission trips and volunteered with Habitat for Humanity for many years. When not working, Stacy’s and Sherry’s love of travel took them to all fifty states and sixty-five countries. He loved playing bridge which he did up until his illness. He enjoyed watching tv dramas and reading mystery books which frequently led to nice naps in his chair. Stacy leaves behind his loving wife Sherry, son Banks S. Robinson, Jr. (Polly), daughter Elizabeth (‘’Lisa’’) R. Chidsey (John), five grandchildren Jay Robinson (Amanda), Sarah Bryan (Steven), Marshall Robinson (Beth), Lauren Chidsey (Michel Burnes), and Cameron Chidsey (Bronte). There are four great-grandchildren with another on the way. He also leaves his older sister Carolyn R. Lineberger, (Jason) and younger brother Starr Robinson (Brenda). He was predeceased by his older brother Roy Robinson, Jr. and his wife Allene. His in-laws were as precious to him as his own brothers and sisters, and he leaves Jean Piercy, Deanna Herlong (Vaughn), and Shannon Scott to comfort and care for Sherry. Stacy came from a big family and there are many cousins, nephews and nieces who were special to him, but are just too numerous to name. A celebration of his life will be held on Saturday March 12th at 10am at Southminster Chapel with a reception to follow. His graveside ceremony will be held at 1pm at Providence Presbyterian. The funeral home will not be involved in the service.

The family of Banks S. Robinson created this Life Tributes page to make it easy to share your memories.