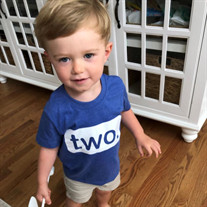 Benjamin Poole was a little boy with a sweet voice, kind heart and precious demeanor. He died on Tuesday after a long battle with medulloblastoma. He was 3 years old. He had a soft, sweet nature and an angelic voice but he fought like a warrior. His parents, his grandparents and his Uncle Clark were with him when he passed and his mother and father say he looked at peace. He was an adorable little boy who lived his life for the precious moments that make each day special. He didn’t seem to know he was sick. Whether singing “High Hopes” during his chemotherapy, swimming in his red shirt with daddy between treatments or coloring with mommy, he radiated joy every day. He was a fan of balloons, bounce houses and Mickey Mouse. He was very detail oriented little boy who preferred his green blankie and picked the threads on his blanket with his pingers (fingers). His short life before his diagnosis was filled with time with his Mimi and Pawpaw, his Yaya and Granddad and his Woof Woof, Leo. He had visited the beaches in Florida, the Bahamas, Beavercreek, Colorado, visited cousins in Washington DC and even spent time in the Watergate hotel. Not often we experience an angel on earth. The signs were subtle but they were there. When he was born, he quietly looked up to his mommy and daddy with wide blinking eyes taking them in. He felt no urge to cry. He was an easy child who didn’t try to get into cabinets or cause his mom too much stress. During his treatments and chemo, he’d still sing and dance to his favorite songs. As he lost his hair from chemo, the remaining hairs took the shape of a halo and in the last weeks, during sleep he would reach his hand up to the sky on and off and point. The signs were subtle but they were there. While medulloblastoma stole his body from us, his vibrant soul remains in our hearts. He is survived by his father and mother Zach and Molly Poole, and his little sister Madelyn, his grandparents Monica and Rodger Poole, his Uncle Clark Poole (Courtney), and his grandparents Dick and Debbie Fredeking and his aunt Arden and Uncle Chris Edwards and Uncles Richard and Bobby Fredeking. In Benjamin’s memory, his family has created a foundation to assist other children going through this disease as well as foster research in finding a cure. Contributions are encouraged to the “Benjamin The Brave Medulloblastoma Cancer Foundation”, 5762 Summerston Pl, Charlotte NC 28277. Graveside services will be held at 11 am on Saturday, October 2, 2021 at Providence Presbyterian Church Cemetery, 10140 Providence Church Ln, Charlotte, NC 28277. Arrangements are in the care of Heritage Funeral Home. An online guest and condolence registry is available at www.heritagecares.com

Benjamin Poole was a little boy with a sweet voice, kind heart and precious demeanor. He died on Tuesday after a long battle with medulloblastoma. He was 3 years old. He had a soft, sweet nature and an angelic voice but he fought like a warrior.... View Obituary & Service Information

The family of Benjamin Robert Poole created this Life Tributes page to make it easy to share your memories.

Benjamin Poole was a little boy with a sweet voice, kind heart...

Send flowers to the Poole family.