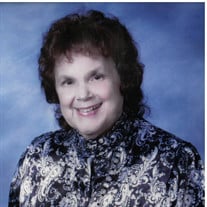 Betty Laura Vogler Houston passed away peacefully at her home on August 9, 2021 after an extended illness. Betty was born in Mount Airy, NC on September 7, 1938, the 7th of eleven children to John William Vogler and Jessie McKinney Vogler. She was brought up in a generous and loving Christian home. Each of her four sisters and six brothers were very special to Betty throughout her life, as well as her loving parents. After high school graduation, Betty attended Baptist Hospital School of Nursing in Winston- Salem, NC. After three years of rigorous training, she received her Bachelor of Science in Nursing. She relocated to Chapel Hill, NC with two of her classmates where she was employed by NC Memorial Hospital. She served in several capacities but always loved working in the operating room. While living and working in Chapel Hill, she renewed her friendship with John. She had met him through a mutual friend while working at Baptist Hospital. While the relationship started as casual dating, it progressed over time and became more serious and ultimately led to a proposal and engagement. John graduated from UNC and began his military service. Betty returned to Mount Airy to work at the local hospital. On March 19, 1961, Betty and John were married in a beautiful ceremony held at Bannertown Baptist Church, her home church in Mount Airy. They lived in Lenoir, NC for a short time where she worked at Dula Hospital. In 1963 the family moved to Charlotte and she was employed at Charlotte Memorial Hospital ( now Atrium). Her specialty was in the operating room where she assisted in open heart surgery for several years. Betty always embraced a strong religious faith. At Sharon Presbyterian Church, she practiced her faith by serving as a Sunday school teacher, chancel choir member for over 40 years, bell choir member, first female Sunday school superintendent and strong supporter of the youth program, developed several special programs for the youth and produced a history video of Sharon Presbyterian Church. In addition, Betty managed the home and gave both children, J.B. and Laura, special attention in every endeavor as John’s job required a great deal of traveling. Among her many talents, Betty was an accomplished artist. She created beautiful oil paintings both still life and portraits. She also created a line of special custom Christmas ornaments which blossomed into an annual influx of orders from all over the country and a few foreign countries. She loved being creative and was blessed with the ability to create beautiful things. In 2000 the family moved to Weddington, NC where she and John spent their retirement years enjoying great times with family, friends and neighbors. During these years she rejoiced when Laura married the love of her life, Butch and later as J.B. married the love of his life, Sonja. These unions made her family and life complete. Betty lived life to the fullest. Her first love was her Savior, then her family and friends. She always found a way to serve others. She lived a beautiful life and is now at peace. Betty is survived by her husband of 60 years, John Barr Houston, III. One son, John Barr “:J.B.” Houston, IV (Sonja Rena’ Hill Houston) of Weddington, NC. One daughter, Laura Elizabeth Houston Ferguson (Hoyt Malcolm “Butch” Ferguson) of Monroe, NC. One step-grandson, Aaron Paul Wike of Charlotte, NC. One step-granddaughter, Rebekah Mae Davis Mounts (Mark Shane Mounts II) of Monroe, NC. One great grandson, Landon Eric Mounts of Monroe. Brothers Ronald Delano Vogler (Roxie Jane Wall Vogler) of Mount Airy, NC and Bobby Rogers Vogler of Mount Airy, NC. Sisters Peggy Joanne Vogler Sutphin of Grandberry, TX, Patsy Kaye Vogler Paul of Ashboro, NC and Dorothy Gayle Vogler (Dennis Glenn Riggs) of Dobson, NC. Betty is also loved and survived by many nieces and nephews. The family will have a funeral service Friday, August 13, 2021, 6:00PM at Heritage Funeral and Cremation Services, Weddington Chapel 3700 Forest Lawn Drive Matthews, NC with a second memorial service to be held Saturday, August 14, 2021, 2:00PM at Moody Funeral Home, 206 W. Pine Street Mount Airy, NC. Burial will follow at Skyline Memory Gardens in Mount Airy. The family would like to have a casual service and ask that guest wear business casual attire, In lieu of flowers family ask that memorial donations be made to Hospice of Union County.

Betty Laura Vogler Houston passed away peacefully at her home on August 9, 2021 after an extended illness. Betty was born in Mount Airy, NC on September 7, 1938, the 7th of eleven children to John William Vogler and Jessie McKinney Vogler. She... View Obituary & Service Information

The family of Betty Vogler Houston created this Life Tributes page to make it easy to share your memories.

Betty Laura Vogler Houston passed away peacefully at her home...