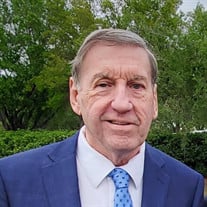 Bruce Gregory Kaemmer, 71, of Waxhaw, North Carolina passed into eternal life on November 25, 2021, after suffering complications due to a traumatic brain injury. We would like to express our sincere appreciation to Novant Health Presbyterian Hospital in Charlotte, NC for their compassionate care since October 19, 2021. Bruce was born on May 13, 1950 to Herbert and Lucille Kaemmer in Milwaukee, Wisconsin. The family moved to Whippany, New Jersey where Bruce graduated from Bayley-Ellard high school in 1968. He went on to earn his Bachelor of Science in Mechanical Engineering from the New Jersey Institute of Technology (formerly Newark College of Engineering) in 1973. After graduation, he landed his first job as a sales engineer at Worthington Pump Corporation in Atlanta, Georgia. His sales area covered nine southern states and the Caribbean islands. While living in Atlanta he met his future wife Rebecca “Becky” Lynn Watson, and they wed in 1979, going on to have four children, Jennifer, Greg, Brad, and Kevin. Bruce and Becky later moved to the Charlotte, NC area where Bruce worked for Essex Group as a mechanical and design engineer. There he developed US Patent number 4,964,363, a system of assembly and filling large cables in a single pass at a single station. When Bruce retired, he continued to work as a substitute teacher at local high schools in North and South Carolina where he enjoyed teaching math, science, and social studies. Bruce was passionate about many things, namely astronomy, photography, sports (especially the Carolina Panthers and Charlotte Hornets), bowling, jogging, science, math, nature, and history. He was an avid James Bond fan and loved and collected most of the Bond films. His favorite music included the Beach Boys, Bread, Led Zeppelin, Jimmy Hendrix, Bob Dylan, the Troggs, Perry Como, Nat King Cole, and Elvis. He was a devout Catholic, dedicating much of his time to St. Matthew Catholic Church where he was a choir member for many years and loved it when he was chosen as the Sunday Mass cantor! He was also involved with his wife Becky in the SPRED program at the church, helping young adults with disabilities. He was very much into game shows and almost never missed an episode of Wheel of Fortune or Jeopardy. His favorite board games were Scrabble, rarely losing a game, and Sorry. Anyone who knew Bruce knew that he was the most loving husband and father a family could ask for. He loved to watch his daughter dance in ballet and tap. He encouraged his boys and supported them as they grew up playing sports and being involved in Boy Scouts. He never missed a dance performance or game. He went out of his way to be the house chef, always cooking breakfast for the family in the morning and working on his dinner masterpieces. His family meant more to him than anything else in the world, something he often mentioned. He was unendingly proud of his children and all their accomplishments and always tried his best to support them. Bruce was predeceased by his mother and father Lucille and Herb, and his youngest brother Michael. He is survived by his wife Becky, his daughter Jennifer, his sons Greg, Brad, and Kevin, and his siblings Herbert, Mary, and Brian. He also has two grandchildren, Grady and Alice. Please join us in celebrating Bruce and the great man, husband, and father he will forever be. Visitation will be held at Heritage Funeral Home - Weddington Chapel on Wednesday, December 1st from 5 - 7 PM. A Mass of Christian Burial will start at 11 AM on Thursday, December 2nd at St. Matthew Catholic Church; with burial to follow at Forest Lawn East Cemetery. Following the services, all are welcome to attend a celebration of life gathering for family and friends starting at 2:30 PM at the family home. Address will be provided at the service.

Bruce Gregory Kaemmer, 71, of Waxhaw, North Carolina passed into eternal life on November 25, 2021, after suffering complications due to a traumatic brain injury. We would like to express our sincere appreciation to Novant Health Presbyterian... View Obituary & Service Information

The family of Bruce Gregory Kaemmer created this Life Tributes page to make it easy to share your memories.

Send flowers to the Kaemmer family.