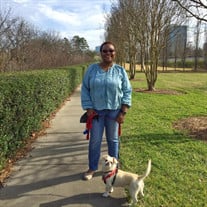 Catherine Melissa “Catt” Outing November 7, 1961 – March 20, 2022 Catherine Melissa Outing, 60, of Charlotte, NC, affectionately known as “Catt” passed away on Sunday, March 20, 2022. Catherine was the daughter of the late Jessie Dickens and Marie Frances Outing. She was born and raised in Bronx, NY. Catherine received her education in the Public Schools of Bronx, New York. She was raised by two powerful and inspiring women. Her mother, Frances Outing and her aunt, Margaret “Boggy” Murphy. In her early twenties she relocated to Los Angeles California. It was there in Los Angles, that she had a great twenty plus year career in the film industry. She worked for some of the biggest names in the industry, Fox, Universal, Dreamworks and Paramount. In 2014 Catherine decided that she wanted to be closer to family and she and Brandon made the move to Charlotte, NC. Here in Charlotte, she worked for serval large companies. Catherine’s biggest enjoyment came for her son Brandon, whom she was most proud of. She also had two dogs Bonnie and Margo that she loved. Catherine never met a stranger. She had a wonderful outgoing personality. She was an incredible mother and friend. She will truly be missed. Catherine is survived by her loving son Brandon Lee Samuel and a host of family and friends. If Tears Could Build A Stairway If tears could build a stairway, and memories a lane. I would walk right up to Heaven and bring you back again. No farewell words were spoken, no time to say “Goodbye”. You were gone before I knew it, and only God knows why. My heart still aches with sadness, and secret tears still flow. What it meant to love you Mom – no one can ever know But now, I know you want me to mourn for you no more; To just remember all the happy times life still has much in store Since you’ll never be forgotten, I pledge to you today A hollowed place within my heart is where you’ll always stay.

The family of Catherine Outing (Technical Difficulty with livestream) created this Life Tributes page to make it easy to share your memories.

Send flowers to the Outing family.