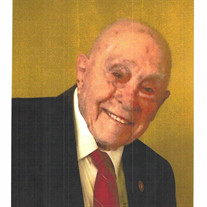 Not sure what to send?

Cecil Connor Burd, born in Louisville, Kentucky on February 1, 1925 to John Ernest Burd and Sarah Elizabeth Connor Burd passed away on May 11, 2022 in Charlotte, NC. Cecil graduated from high school in the spring of 1943 and immediately joined the United States Marine Corps to serve his country during WW II. His basic training was at Camp Pendelton, California and after a short furlough back in Kentucky he was assigned to the 22nd Marine Corps Regiment , 6th Marine Division. He was involved in three major campaigns, Marshall Islands, Guam, and Okinawa. He served in the occupation force in China until his discharge in December 1945. Following his return to Louisville, Cecil attended Ahren’s Trade School in their Arts Department. Afterwards he was employed by Bacons Department Store where he spent forty one years as the display manager. He was predeceased by his parents, brother Huhlon Burd and wife of thirty six years Juanita C. Burd. He is survived by his three children Connie Curth (Dale), John Burd (Patty), Lisa Vogel (Steve), grandchildren Doug Curth, Laura Curth Ellis, Abby Burd Buford, Matt Vogel, Katie Vogel Money, Andy Vogel and nine great grandchildren. He is also survived by two stepdaughters June Whelan and Judy Reid (Jim), three step-grandchildren Pamela Tonini (Sergio), Karen Nolcox (Tony), Jimmy Reid (Shelley) and five step-grandchildren. He is also survived by the mother of his three children, Mellie Montgomery. Along with his family, he will be missed by his many friends and staff at Brookdale Carriage Club in Charlotte, NC where he has lived the past 6 years, especially by his dear friend, Joyce Essman. Cecil loved the game of golf, playing from his earliest days as a caddie at Audubon Country Club until shortly after his ninety seventh birthday. He was a life-long fan of the University of Kentucky sports teams, rarely missing a televised football or basketball game. He and Juanita enjoyed traveling to many reunions of the 6th Marine Division until her health made that impossible. A celebration of his life will be held at Resthaven Memorial Park, 4400 Bardstown Road, in the Mausoleum Chapel with interment following the service on Friday, May 20th at 1 PM. In lieu of flowers, donations can be made to the Semper Fi & America’s Fund, 825 College Blvd., Suite 102 PMB 609, Oceanside, CA 92057.

Cecil Connor Burd, born in Louisville, Kentucky on February 1, 1925 to John Ernest Burd and Sarah Elizabeth Connor Burd passed away on May 11, 2022 in Charlotte, NC. Cecil graduated from high school in the spring of 1943 and immediately joined... View Obituary & Service Information

The family of Cecil Connor Burd created this Life Tributes page to make it easy to share your memories.