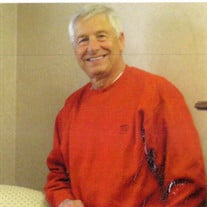 Charles W. Correll Jr., 79, of Stallings, NC, passed away on August 8, 2021. Chuck was born March 21, 1942 in Hamburg, PA, to the late Charles and Dorothy Degler Correll. Chuck was a graduate of Marist College, where he earned his Bachelor’s degree. He also served honorably for 4 years in the US Army. He was a company clerk stationed in Hanau Germany. Chuck worked for IBM as a Project Manager; and was self-employed as a Quality Consultant. Chuck played minor league baseball; and loved golfing, tennis, softball and volleyball. Although he loved his sports, his number one pastime was his family. He was a great communicator. When it came to people, there was never a stranger who didn’t soon become a lifelong friend. Chuck truly embodied the saying by Roald Dahl: “There are no strangers in here, just friends you haven’t met.” Left to cherish Chuck’s memory is his loving wife of 53 years, Eileen 'Cindy' Correll; and his children Lara Correll, Cindy (Rob) Noon and Kevin (Christine) Correll. He is also survived by his grandchildren Meghan Shafer, Turner Correll, Ryan Noon, Quinn Correll, Amanda Noon, Claudia Correll, Juliet Correll, Luke Correll; brothers Bob and Barry Correll; sisters Carolyn Hartman and Nancy Preston. Chuck's life will be celebrated on Thursday, August 12th, starting with visitation from 10:00 -11:30 AM at Heritage Funeral Home - Weddington Chapel. A Funeral Mass will follow at St. Matthew Catholic Church. The Eugology will begin at 12:45 PM with Mass starting at 1:00 PM. Burial will then follow Mass at 2:30 PM at Forest Lawn East Cemetery. In lieu of flowers, the family requests memorial contributions in Chuck’s name be made to Levine & Dickson Hospice House - Aldersgate (https://www.hpccr.org/donate); or the Leukemia & Lymphoma Society (https://www.lls.org); or the YMCA of Metropolitan Washington (https://www.ymcadc.org/support-the-y/give/memorial-funds/).

Charles W. Correll Jr., 79, of Stallings, NC, passed away on August 8, 2021. Chuck was born March 21, 1942 in Hamburg, PA, to the late Charles and Dorothy Degler Correll. Chuck was a graduate of Marist College, where he earned his Bachelor&#8217;s... View Obituary & Service Information

The family of Charles W Correll Jr. created this Life Tributes page to make it easy to share your memories.