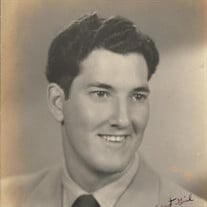 Charles “Chuck” Courtright, 85, of Waxhaw, NC passed away on MAY 27, 2021 at home surrounded by his loving family. Chuck was born in Miami, FL to the late Clarence and Rosa Aline Courtright. After graduating from Miami Edison High School in 1953, Chuck joined the military. He first completed the Navy’s 90 day Airman Training, then spent the rest of his time serving in the Air Force. While visiting his sister, Rose, in Wheaton IL, he met Marian Walter. After 4 years of faithful service to his country, Chuck was honorably discharged in 1957 as an Airman 1st Class. After his military service, Chuck and Marian married on December 12, 1957. Chuck worked for the post office in Chicago for several years where three of their four sons were born (Allan ‘59, Rick ‘61, Ron ‘62.) In 1962, the family moved to Las Vegas, NV where he worked for the Atomic Energy Commission as a meteorologist at the Nevada Test Site. Their fourth son, Wayne, was born during that time. In 1964, the family moved back to Chuck’s home town of Miami where he went to work for the University of Miami as a meteorologist and Hurricane Hunter. He was part of Project Storm Fury in the late 1960s. He also worked for the University of Miami later as a Radiation Safety Officer. Chuck loved sports, puzzles and games, and Sudoku. Of course his favorite pastime was his family and grandkids. He loved watching the kids’ and grandkids’ sporting events. He was outgoing and social. A friendly communicator, and a close friend of Jesus. He was a member of Calvary Church since 1992. Chuck leaves behind his loving wife of 63 years, Marian Courtright. Also left to cherish his memory are his sister Rose Gibson and his children, Allan (Kathy) Courtright, Rick (Lois) Courtright, Ron (Maria Elena) Courtright, and Wayne (Kathy) Courtright. His grandchildren Kim, Katrina, Josh, Joe, Kyle, Amber, Victoria, and Lisa; great-grandchildren Zeke, Ava, SamseyJo, Isabelle, and Hannah. The Courtright family wishes to thank all of those who were a part of Chuck’s life. A graveside service with military honors, will be held at Magnolia Memorial Gardens, 5801 Pineville-Matthews Rd., Charlotte, NC 28226, on Wednesday, June 2nd, 10 AM. A memorial service will be held in the Townsend Auditorium at JAARS, 7405 Jaars Road, Waxhaw, NC 28173, Wednesday, June 2nd, 2 PM. In lieu of flowers, please consider donations in Chuck's memory to Calvary Church.

Charles &#8220;Chuck&#8221; Courtright, 85, of Waxhaw, NC passed away on MAY 27, 2021 at home surrounded by his loving family. Chuck was born in Miami, FL to the late Clarence and Rosa Aline Courtright. After graduating from Miami Edison High... View Obituary & Service Information

The family of Charles LeRoy Courtright created this Life Tributes page to make it easy to share your memories.

Send flowers to the Courtright family.