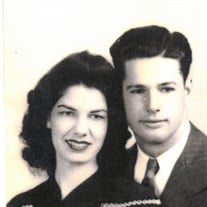 Charles E. Woodum and Elna D. Woodum Charles Edward (Woodie) Woodum went to heaven on December 9, 2020. Elna Donaho Woodum joined him in heaven on November 6, 2021. They had been married 79 years and had loved each other well. Woodie and Elna deeply loved and are survived by their son, Randy Woodum and his wife, Gayle, of Houston, Texas; their daughter, Linda Woodum Loberg and her husband, John, of Charlotte, North Carolina; their grandchildren, Jennifer Loberg Briggs, James Loberg, and Zachary Woodum; their great granddaughters, Makena and Reese Briggs and Ryan, Taylor, and Avery Loberg; Woodie’s sister, Joyce Fisseler and their sister in law, Lucy Woodum; and their many nieces and nephews. Woodie was born to Jim and Naomi McFarland Woodum in Milam County, Texas on November 28, 1923. Upon graduating from Yoe High School in Cameron, Texas at 16 years old, Woodie studied Aeronautical Engineering. The US Army Air Corps called him into service in January 1943 and he then served three years as an aircraft specialist in the South West Pacific Theater during World War II. His service included the Invasion of Hollandia, the Battle of Leyte, and the Battle of Luzon. Woodie received several commendations for his modifications of P38s, B25s, and B24s. At war’s end, Woodie returned to his bride in Texas where he had a distinguished career in the insurance business followed as the CFO/partner of a commercial interior construction company in Houston, Texas. Later he had a farm/ranch near Cameron where he bred Longhorn cattle and thoroughly delighted his grandchildren. Woodie was always a devoted and loving son, husband, father, grandfather, great grandfather, brother, and uncle. Elna was born in San Antonio, Texas to Dee Wilson Donaho and Larcie Young Donaho on June 16, 1924. She was 17 years old when she met and married Woodie, the love of her life. While Woodie was overseas, Elna was working at Kelly Field in San Antonio. Elna spent 18 years on staff at Richmond (now McNamara) Elementary School in Houston, Texas. She held many volunteer positions after their move to Cameron, Texas including at the library, the hospital, and the garden club. Elna had a lifelong enjoyment of antiques and she owned and operated an antique store, Riverside Antiques and Uniques, outside of Cameron. She was a wonderful daughter, wife, mother, grandmother, great grandmother, and aunt. In 2005 Elna and Woodie moved to Charlotte, NC. Elna’s and Woodie’s 97 years were well lived. They each and together were blessings to their family and to many others. They will be missed, but our joy is in the fact that they are now in heaven forever. There will be a memorial service for both of them on January 11, 2022 at the Houston National Cemetery at 11:30 AM.

Charles E. Woodum and Elna D. Woodum Charles Edward (Woodie) Woodum went to heaven on December 9, 2020. Elna Donaho Woodum joined him in heaven on November 6, 2021. They had been married 79 years and had loved each other... View Obituary & Service Information

The family of Charles & Elna Woodum created this Life Tributes page to make it easy to share your memories.

Send flowers to the Woodum family.