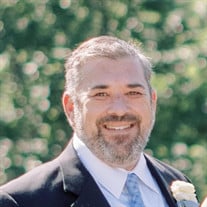 Chuck Cunningham Of Charlotte Mr. Cunningham, 51, passed away on June 5, 2021. The family will receive friends from 6-8pm on Thursday June 10th at Heritage Funeral Home, Indian Trail Chapel. His funeral to celebrate his life will be held at 11am Friday, June 11th Good Shepherd Church and burial to follow at 1pm at Magnolia Memorial Gardens. Chuck was born October 27, 1969, only son of the late Charles Emory and Joyce Maynor Cunningham. He was also preceded in death by his sister Frances Irene Cunningham. Chuck worked for Hedrick Gardner for over 15 years as Operations Manager and in several other capacities. He was a mentor and friend to many, and he truly enjoyed what he did. He helped improve the lives around him by developing creative solutions to problems and issues. Chuck loved his family and talked about them often. He enjoyed sending them Tik Toks to improve their lives with valuable life hacks and funny content to make them laugh. He recently found the love of Mexican Train Dominoes because he always seemed to have a way of winning. He patiently played “I.T. Guru” for his Mother-in-Law, Linda Price. He also was a great storyteller, and those who had an opportunity to hear one of his stories would guarantee a good belly laugh. Chuck recently became ordained online to marry his oldest son. He is preferred to be known as The Honorable Gracious Brother Apostle Bishop Evangelical Ordained Minister, Charles William Cunningham, House of the Lamb, Jordan River, Hand of God, Flowing Holy Spirit Freewill Baptist Church. He was a devoted fan of the Georgia Bulldogs and the Carolina Panthers—never missing a game and even build a man cave with a 112" TV. The whole neighborhood could stop over and watch the games. Chuck was a brown belt in mixed martial arts and loved teaching the kids' leadership Martial Arts. He spent hours at the dojo supporting both his sons as they practiced mixed martial arts skills. He felt that it was important for both women and children to know self-defense to protect themselves when necessary. Chuck spent many years working in security at the Speedway and always had a funny story to tell about what drunk people did during speed week. Chuck is survived by his high school sweetheart, Amy Gray-Cunningham; children, Skylar Montrose (Adam), Alex Davis (Cat) and Chase Cunningham (Brittney); grandson, Brody Richardson; great-aunt Ruby Healy; nieces & nephews, Jacob Daniels, Bailey Gray, Jonah Daniels and Aiden Gray; four-legged children Joey, Phoebe, Sadie, Buddy and Charlie and numerous other relatives. In lieu of flowers, donations may be sent to The Kidney Foundation, 7413 Six Forks Road, PMB: 255, Raleigh, NC 27165. Online condolences may be left at www.heritagecares.com

Chuck Cunningham Of Charlotte Mr. Cunningham, 51, passed away on June 5, 2021. The family will receive friends from 6-8pm on Thursday June 10th at Heritage Funeral Home, Indian Trail Chapel. His funeral to celebrate his life will be held... View Obituary & Service Information

The family of Chuck Cunningham created this Life Tributes page to make it easy to share your memories.