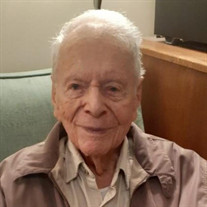 Curtis Abercrombie Gray was born on April 17, 1916 on a farm in Williamston, SC. He is the son of D’Arcy Paul Gray and Bertha Anderson Gray. Completing Curtis’ family were D. Paul Gray Jr., Narcissa Gray Adair and Anderson McDowell Gray, all deceased. He graduated from Clemson University in 1937 with a Bachelor of Science Degree in Mechanical Engineering. Curtis served in the Army during World War II in the Ordinance Department. He served as Company Commander, retiring as a Major. Curtis’ tour of duty was in England, North Africa, Sicily, and Italy. In his professional life, Curtis worked as a Registered Professional Engineer with JN Pease and Associates. He retired as head of the Mechanical Department and was an Associate Member of the firm. Curtis was a member of the American Society of Heating, Refrigerating and Air Conditioning and Engineers, Professional Engineers of NC, and Charlotte Engineers Club. Curtis married the love of his life, Jeannette Ward Gray in 1941. They were married for almost seventy years. He died just two days short of Jeannette’s birthday. It is great to think of them celebrating it again together. He lived in the house they designed and built until he was 102. Curtis then moved into Legacy Heights Community where, with their help, he made it through his second pandemic. Curtis is survived by his daughter, Norma Gray Lefler and her husband Steve of Seattle, WA, their children: Laura Gray Lefler Zannis, her husband Nick and son, Alexander of Weld, ME, and Christopher Samuel Lefler and his son, Roshan of Seattle, WA. He is also survived by DeWayne Koontz, his wonderful caregiver, lifeline, and counselor. All of us are deeply grateful for DeWayne’s help. A graveside service will be held at Providence Presbyterian Church on Wednesday, July 28 at 11:00 AM. Family is in the care of Heritage Funeral Home, Weddington Chapel. Online condolences may be made at www.heritagecares.com.

The family of Curtis Abercrombie Gray created this Life Tributes page to make it easy to share your memories.

Send flowers to the Gray family.