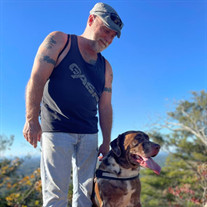 Curtis Brian Holmes Charlotte, North Carolina Curtis Holmes was the only son of Kenneth Raymond Holmes who recently passed away on January 3, 2022, and Nellie Marie Parrish Holmes of Lexington, North Carolina. Curtis was born in Daytona Beach, Florida on August 7th, 1960, and passed away on February 4, 2022, at 61 years of age. Before completing his life journey, he and his former wife Anne Mitchell were blessed with two amazing sons Logan and Joshua Holmes both of Matthews, NC and his most loving canine companion Zeus. Curtis was the brother of 3 sisters, Karen Camero (Fiancé Mark Souter) of Baton Rouge, LA, Kathy Williams (Michael) of Charlotte, NC, and Lisa Gex (Cal) of Waveland, MS. He was also the uncle to a niece Kaitlyn, 5 nephews: Jason, Daniel, Eric, Cal, and Paolo, and two great nieces, Emma and Leila, along with many cousins from Florida and Canada. Early in his career, Curtis was an architectural draftsman. He worked for Dennis Hughes Designs, designing many award-winning homes in Charlotte, Lake Norman, and surrounding areas. He opened his own businesses: Holmes by Design and Lotus Design. He was inducted into the American Institute of Building Design (AIBD). He was a certified Professional Building Designer and became the President of the Piedmont Chapter for AIBD. He later pursued a career that stemmed from AIBD and began a career at Stone Center as Inside Sales Manager. Curtis enjoyed riding his Harley in his spare time while also working for Harley Davidson in between careers. In the past year, he was blessed with the opportunity to have Logan work alongside him at Stone Center while Joshua completed his studies to become a Registered Nurse. Logan and Joshua were able to comfort their father throughout his illness. Curtis had an amazing faith in God and had a graceful acceptance that we are only on this earth for a short time. This provided peace and comfort to those who were blessed to have shared with him his final days. In lieu of flowers, donations can be made to The Humane Society of Charlotte or Harley Davidson Foundation, Inc.

The family of Curtis Holmes created this Life Tributes page to make it easy to share your memories.

Send flowers to the Holmes family.