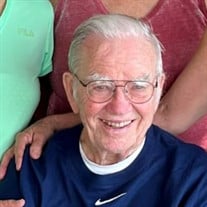 Cyrice Theberge, 94, of Pineville, NC, departed his life on October 24, 2021 at The Haven in the Village at Carolina Place, Pineville, North Carolina. Cyrice was born on August 7, 1927 in Gravelbourg, Saskatchewan, Canada at home to the late Joseph and Cecilia Theberge. He is survived by his children: Donna Graham (Joseph) of Hillsborough, NJ, Daniel Theberge (Mary) of Reston, VA, and Douglas Theberge (Cathy) of Cave Creek, AZ, Shelley Collins of Charlotte, NC, son-in-law Mark Towler of Arcadia, OK, and Julie Theberge of Indian Land, SC; grandchildren: Jeff Graham (Kree), Ryan Collins, Michael Collins, Matthew Theberge (Allison), Danielle Theberge (Gabe), Benjamin Towler (Lindsay), Nicholas Towler, Stephanie Towler (Dylan), and Grayson, Cooper and Kenzie Theberge; and great-grandchildren: Nate and Eliza Graham, Landon and Liam Collins, Owen Towler and Camille Theberge. He was preceded in death by his beloved wife Elizabeth November 21, 2020, his daughter, Lisa Towler, son-in-law Paul Collins and his brother, Martin Theberge. Cy and Betty were married in St John’s Nepomucene Church, Philadelphia, PA in 1952. Throughout their 68 years of marriage, he was a wonderful, caring and loving husband, father, grandfather, great-grandfather and father-in-law. He lived a great life and devoted that whole life to his family. He was a well-respected class act who had a positive impact on countless people. He was an incredible man with a happy positive personality and a wonderful smile that lit up a room when he entered. He joined the Air Force in 1948 and met his beloved wife in 1950 while he was waiting to ship out to Puerto Rico. He visited her for the first time after a year-long letter writing courtship and proposed before his return to Puerto Rico. They married a year later after his discharge from the Air Force. He was incredibly driven and earned a bachelor’s degree from Michigan State University while raising his first 3 children and working multiple jobs. He worked his entire 34 year career at IBM as an electrical engineer while having 3 more children and retired in 1990. They drove all over the US and Canada visiting family and friends over the next 25 years. He leaves behind a great legacy and lots of memories and will be missed by everyone who knew him. Cyrice and Elizabeth will be laid to rest together at Arlington National Cemetery at a later date. The family would like to extend a sincere thank you to Hospice and Palliative Care, Charlotte Region and the dedicated staff at the Laurels and The Haven for their exceptional care and support. In lieu of flowers, memorial donations may be made to the Foundation for Peripheral Neuropathy at www.foundationforpn.org. Online condolences may be left at www.heritagecares.com

Cyrice Theberge, 94, of Pineville, NC, departed his life on October 24, 2021 at The Haven in the Village at Carolina Place, Pineville, North Carolina. Cyrice was born on August 7, 1927 in Gravelbourg, Saskatchewan, Canada at home to the late... View Obituary & Service Information

The family of Cyrice Theberge created this Life Tributes page to make it easy to share your memories.

Cyrice Theberge, 94, of Pineville, NC, departed his life on October...