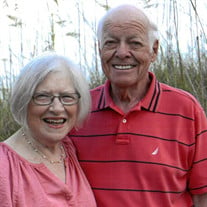 David “Dave” Cullen, of Mint Hill, NC, entered his eternal home, December 23, 2021. He was there to welcome his bride of 66 years two days later. He was 92 years old. He was graciously blessed to live his last years with Ginny, children and grandchildren close by. Dave was born in Butler, PA, December 8, 1929. He graduated from Muskingum College ’52 and then served in the Army during the Korean War. After returning, he and Ginny were wed. Three years later, with his young family in tow, they moved to Terre Haute, IN. He began a career with the Anaconda Aluminum Company (later Alcan Company) where he retired in 1987. He then transitioned into a commercial real estate career at Pfister Company in Terre Haute. Dave and Ginny were an integral part of Bible Baptist Church in Terre Haute, IN, involved in many roles throughout their years there. He and Ginny moved to Charlotte in 2001 to be closer to family. He had many fond memories of their family trips to their camp “Chestnut Ridge Lodge” in Keating Summit, PA. It was there he found solace in the mountains, woods, and tending to a grove of American Chestnut trees he planted. The family has fond memories of campfires, blueberries, hikes, and snowmobiling. Dave and Ginny enjoyed day excursions exploring the Pennsylvania Wilds. Dave had several interests including reading historical fiction/nonfiction books, war stories, woodworking, “handyman” projects around the house and cheering on the Penn State Nittany Lions. He looked forward to times spent with his 8 grandchildren. He always sought ways to encourage them to “learn” and enjoyed keeping up with their various endeavors. He is preceded in death by his parents, Dave and Marie Cullen, brother Herbert “Buzz” Cullen, and a sister Nancy Wood. Left to honor his memory are his four children and their spouses, Tim (Tammy) Cullen of Fishers, IN, Tom (Diane) Cullen of Georgetown, IN , Tara (Ken) Dabbs of Mint Hill, NC, and Tammy (Barry) Irvin of Mint Hill, NC. Grandchildren Nathaniel Cullen, Nicholas Dabbs, Andrew (Kayla) Cullen, Jonathan Dabbs, Jonathan Cullen, Meghann Cullen, Matthew Cullen, Christina Cullen. Dave’s wife, Ginny, passed away 2 days later on Christmas Day and the graciousness of the Lord was evident in that neither one had to know the grief of the loss of a spouse. A memorial service is planned for 2:00pm Wednesday, December 29, 2021 at Christ Covenant Church, 800 Fullwood Ln, Matthews, NC . Visitation will precede the service at 1:00pm. Burial will follow in the Matthews Historical Cemetery. Rev. Bruce Creswell will officiate the dual funeral service for the couple. Heritage Funeral Home is handling the arrangements. The family wishes to extend their gratitude for the friendships, love and support over the many years from the Corem Deo Sunday School class at Christ Covenant Church and their community pastor Rev. Bruce Creswell. Also, we wish to acknowledge the team of caregivers who showed much compassion and patience in supporting us with his care along with the team at the Levine Dickson Hospice House for their support in his final days. In lieu of flowers, memorial contributions may be made to: God's Adventure Camp, 1011 West Branch Fishing Creek Rd., Roulette, PA 16746 www.godsadventurecamp.com For those that are unable to attend the service in person, the service will be livestreamed by following this link: https://vimeo.com/660485222/d410d3feb9

The family of David "Dave" Cullen created this Life Tributes page to make it easy to share your memories.

Send flowers to the Cullen family.