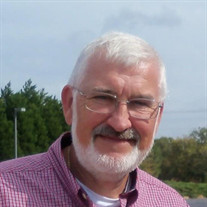 David Clinton Friddle, Jr passed away on April 17, 2021 surrounded by his wife and two daughters. Dave was born in Greenville, SC and moved to Charlotte at a young age. He graduated from Myers Park High school and attended Central Piedmont Community College. Dave met the love of his life, Nancy, in 1974 and they married 3 years later. They had 2 daughters, Ashley and Christie. Dave was known as many things. A son, a friend, a confidant, and a mentor, but the titles he cherished the most were husband, father and Papa. Dave had a heart for people and it wasn’t unusual to find him praying with the cashier at the grocery store. He knew when people were hurting or just needed a listening ear. He made friends everywhere he went and if you became his friend he considered you a friend for life. His pride and joy were his grandchildren. His kind heart and gentle spirit drew them to him. He was the baby whisperer. When Dave entered Heaven he was welcomed by his mother, Viston Tyler Friddle. He leaves behind his wife of 43 years, Nancy Baumgardner Friddle. Father, David Clinton Friddle Sr. and wife Eleanor. Brother, Alan Friddle. His Daughters, Ashley Wojdyla (Robert) and Christie Hill (Quintell) and 4 Grandchildren, Cameron, Blake, Moriah, and Kharis. A service to celebrate Dave’s incredible life will be held at 3PM on April 25th, 2021 at Multiply Community Church. 1819 Dickerson Blvd. Monroe, NC 28110. In lieu of flowers the family requests donations be made to Multiply Community Church General Fund. 1819 Dickerson Blvd Monroe, NC 28110. The family would also like to extend their sincere gratitude to Dr. Ashleigh Maiers of Sanger Heart and Vascular Clinic and Emily Simoneau, MSN, APRN, AGACNP-BL of Metrolina Nephrology for the unwavering love that they showed to our Dave. We will forever be grateful. Online condolences may be left at www.heritagecares.com

David Clinton Friddle, Jr passed away on April 17, 2021 surrounded by his wife and two daughters. Dave was born in Greenville, SC and moved to Charlotte at a young age. He graduated from Myers Park High school and attended Central Piedmont... View Obituary & Service Information

The family of David Clinton Friddle Jr created this Life Tributes page to make it easy to share your memories.