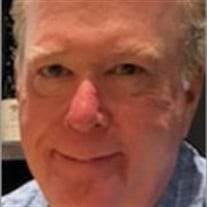 David Timothy Hoff, 61, of Matthews, North Carolina passed away on Thursday, November 11, 2021 after complications from COVID, despite taking all necessary precautions. His family was by his side. Dave was born in the District of Columbia on September 5, 1960. Son of college faculty members, John David Hoff and Jean Maynard Hoff (both deceased), Dave spent most of his teenage years growing up on the college campuses of Alderson Broaddus University (Philippi, West Virginia) and West Virginia University (Morgantown, West Virginia) with his three siblings: Susan Hoff, Karen Hoff (deceased), and Douglas Hoff. A beloved Mountaineer, Dave graduated from WVU in 1984 with a degree in Political Science. On May 5, 1984 Dave married the love of his life, Francy (Madden) Hoff. Together, they spent many wonderful years living in North Carolina and raising their three children together: Katie (Andrew) Hudson, John David (Jessica) Hoff II, and Kristina Hoff. Dave’s children were his greatest joy in life. In addition to his wife and children, Dave also leaves behind his grandson and namesake, David Timothy Hoff II. In his spare time, Dave was an avid golfer. However, when his health declined from challenges of rheumatoid arthritis, he put his clubs away and turned to trap shooting. In doing so, he became a dedicated member of the Charlotte Rifle and Pistol Club, where he made lifelong friends. Dave loved playing his guitar and his family so enjoyed listening to him play. Prior to his death, Dave was close to obtaining his sports aircraft pilot’s license. He no longer needs a plane in order to fly. A funeral service will be open for all to attend at St. Gabriel Catholic Church in Charlotte, North Carolina on Thursday, November 18 at 1:45 pm. The family will receive friends at 1:15PM in the church narthex. A memorial luncheon will follow at 1006 Sandbox Circle, Indian Trail, North Carolina 28079. In lieu of flowers, please consider donating to one of the following causes that were important to Dave: The Arthritis Foundation, the Humane Society of Charlotte, and the Western North Carolina Charter of the Alzheimer’s Association.

David Timothy Hoff, 61, of Matthews, North Carolina passed away on Thursday, November 11, 2021 after complications from COVID, despite taking all necessary precautions. His family was by his side. Dave was born in the District of Columbia on... View Obituary & Service Information

The family of David Timothy Hoff created this Life Tributes page to make it easy to share your memories.

Send flowers to the Hoff family.