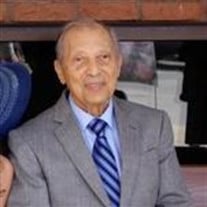 Dominick C. Spedicato was born on May 16, 1932 in Camden N.J., the oldest child and only son of Charles Spedicato and Philomena (Farina). He died peacefully under hospice care on February 2, 2022 at the White Oak Manor nursing home in Waxhaw, tended to by his family and a team of compassionate nurses and aides. The cause was congestive heart failure. He was 89 and ½ years old. Growing up, he loved and protected his younger sisters, Lorraine (who predeceased him) and Barbara. The family home on South Third Street in Camden was not far from the Campbell Soup factory, and Dominick and his friends enjoyed eating juicy tomatoes that fell off the factory trucks when they weren’t running around getting into minor mischief, searching for buried arrowheads or playing pickup baseball. After attending the local public schools, Dominick worked for a time at the Original Pat Steak’s in Philadelphia, which still stands today, across the street from its longtime rival in cheesesteak deliciousness, Geno’s. Dominick was drafted into the Army in 1952 and served for two years during the Korean War. Corporal Dominick Spedicato served with the 82nd Field Artillery in Japan, much of it on the northern island of Hokkaido. Dominick was featured in a book about Korean War veterans called “Defending a Country They Never Knew,” by local author and historian Kathleen Shelby Boyett of Charlotte NC. In his final years, Dominick lived with his daughter, Victoria, and her family outside Charlotte. He met Ms. Shelby Boyett when he lived independently at the Sharon Village Retirement Apartments in Charlotte, where he made many boisterous friends and was a favorite of the ladies, who would dote on him with special treats like sugar-free homemade banana bread. Dominick had moved to the Charlotte area in 2016 to be closer to his daughter and her family. While living at Sharon Village, and he became a budding artist at a class for veterans at Matthews Community Center. He also joined a social group for seniors called STARS at Saint Matthew's Catholic Church and had fun attending luncheons at the Levine Senior Center in Matthews. In short, he kept very busy! He was used to being busy. Dominick married his beloved Theresa (Guacci) in 1959, and they had one child, Victoria, whom they raised in Upper Darby, PA. He worked for over 30 years as a manger and shoe salesman for Thom McAn shoes in the Philadelphia area, where he was laser focused on keeping the customers happy and would stand outside to greet passersby and welcome them into his stores. He took pride in the window displays he designed and also in the fact that he never took a sick day, not one. After retiring from the shoe business, he became a mailroom supervisor for Villanova University and worked there for about 15 years. After retiring from the university, he devoted himself to volunteering at Saint Lucy’s Day School for Children with Visual Impairments, and was a favorite among the students and the sisters and staff who lovingly taught them. A devout Catholic, Dominick’s faith was very important to him, and while living in Upper Darby, he for some years attended Mass every day at Saint Alice parish. An avid reader, Dominick read dozens of 500-page and longer books in the last months of his life -- mostly history and biography, his favorite topics. Always curious about the world and wanting to be up to date on the news, he subscribed to The New York Times even though the paper has a reputation for liberal leanings and he was a staunch conservative. The "Vows" section was his favorite. Dominick also loved animals and nature, and when he lived in Upper Darby, he would feed the local stray cats twice a day. His wife, Theresa, predeceased him in 2012. In addition to his sister Barbara, of Maple Shade, NJ and his daughter Victoria and her husband Val, he is survived by his grandchildren, Eva, Veronica and Nino, and the family dog, Max. He is also survived by his nieces and nephews: Debbie (Chuck), Jack, Michelle, Michael, Rich (Cheryl) and Lori (Dan), and many great-nieces and great-nephews. The funeral Mass will be held on Thursday, Feb. 10 at 11 am., at Saint Matthew Catholic Church, Ballantyne Campus: 8015 Ballantyne Commons Pkwy, Charlotte, NC 28277. Viewing will be from 10 am to 10:45 am in the Narthex. The private burial will follow at Forest Lawn East Ceremony in Matthews. In lieu of flowers, donations may be made in his honor to his favorite charity: St. Lucy School for Children with Visual Impairments, 4251 L Street Philadelphia, PA 19124.

Dominick C. Spedicato was born on May 16, 1932 in Camden N.J., the oldest child and only son of Charles Spedicato and Philomena (Farina). He died peacefully under hospice care on February 2, 2022 at the White Oak Manor nursing home in Waxhaw,... View Obituary & Service Information

The family of Dominick Spedicato created this Life Tributes page to make it easy to share your memories.

Send flowers to the Spedicato family.