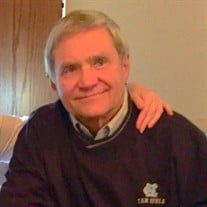 Don Baucom, age 72, passed into the presence of the Lord on July 15 surrounded by his family and close friends after a brief illness. Don was born in Concord, North Carolina and went to Concord High School. He graduated from UNC Chapel Hill with a bachelors in Political Science and then went on to Wake Forest to complete his MBA. After graduate school, Don worked in sales for Xerox Corporation for several years. He moved to a career in real estate before opening his own mortgage company. One of his greatest strengths was customer care - a characteristic that he exhibited in all of his working relationships. He retired in 2009 in order to take care of his father and mother. Don met his wife, Kathi, one Sunday night when he visited First Baptist Church in Charlotte and heard her sing a solo. He asked the minister of music who the soloist was and was introduced to Kathi after the service. They went for dessert and coffee that evening and the rest is history! Don was her amazing partner, soulmate, and biggest fan for 43 wonderful years. They have one son, David Chadwick (Chad) Baucom who is married to Stephanie Baucom and three fantastic (not bragging!!) grandchildren - Kylie, CJ, and Cooper. Don was a man of character, a strong Christian and an example of how to live a moral and upright life. He always did what was right, even when it was more time consuming or more costly. He showed us how to be better people by his display of caring and compassion. He was enthusiastic, joyful and always had a smile for those he met. But most of all, Don loved and supported his family. He cared for his mom and dad in their final years when they needed tremendous assistance. He loved Chad with all his heart and spent years picking him up after school, going to tennis matches, band competitions, church musicals and everything else in which Chad participated. He was an amazing grandfather who would change his own plans in a minute if it meant he could take his grandkids on a trip, see them participate in sports or just pick them up after school. He was honored to be called Papa! After retirement, Don spent time teaching English as a Second Language at Calvary Church He enjoyed meeting folks from various countries and helping them learn how to navigate the English language. He also participated in mission trips to China and Ecuador. His community activities included volunteering with the Matthews Police Department. He loved to travel and he and Kathi had many years together going on cruises in Alaska and Hawaii, river cruises in Europe and various trips around the US. Don also loved North Carolina basketball. He enjoyed going to games in Chapel Hill and at Wake Forest, talking with his buddies about college sports and accumulating enough Carolina gear to stock a store!! No one can replace Don in our hearts but we know he is our guardian angel and will keep watch over us as we go through life. He is undoubtedly wearing Carolina blue in heaven while he talks to Dean Smith about basketball strategy! In lieu of flowers, the family requests those who wish to express sympathy to consider making a donation to The Alzheimer’s Association in Don Baucom’s name. https://act.alz.org/site/Donation2?df_id=32112&32112.donation=form1&_gl=1*hs6sx0*_ga*MTg5MTc2MDQxNS4xNjI2NzEwNDUy*_ga_9JTEWVX24V*MTYyNjcxMDQ1MS4xLjAuMTYyNjcxMDQ1MS4w&_ga=2.184571690.2056725770.1626710452-1891760415.1626710452 The family will receive guests on Saturday, July 24th, from 1-2 PM, with service at 2 PM in the chapel at Calvary Church. Burial will commence at 3:30 PM at Forest Lawn East Cemetery.

Don Baucom, age 72, passed into the presence of the Lord on July 15 surrounded by his family and close friends after a brief illness. Don was born in Concord, North Carolina and went to Concord High School. He graduated from UNC Chapel Hill... View Obituary & Service Information

The family of Donald C. Baucom created this Life Tributes page to make it easy to share your memories.

Don Baucom, age 72, passed into the presence of the Lord on July...