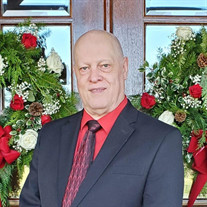 Donald Eugene Frederick, loving husband and father went to be with Jesus on Monday, January 3, 2022 at Novant Health Presbyterian Medical Center, Charlotte, NC after fighting a battle with COVID. His wife of eight years and his children were by his side. Don was born on June 1, 1955, to parents Gene and Betty Frederick in Guildford County. Don was a very soft spoken and loving man and father. He was a man who was always studying and learning new things and was extremely gifted in math and could fix almost anything. His wife called him her MacGyver, if you remember that TV show. He started learning about machines and design at an early age watching his grandpa in his workshop and working alongside his Dad. He became an accomplished machinist and mechanical engineer. Then later in his life after coming to the Charlotte area and marrying his wife, Kathy he started a business called Frederick Services and became a general contractor and real estate agent. After he retired and with his love for design and machines, his wife bought him a wood lathe and he began making hand turned items with the lathe, then moved on to using a C and C machine, which turned into purchasing three laser machines, a 3D printer and diode laser (he loved his machines!!) to create one-of-a-kind pieces. Some of which would become heirloom pieces. This is when he and his wife Kathy started a business called Creations by D and K and a Etsy Shoppe – D and K Handicrafts where they sell these beautiful pieces of art out of wood. Don also had a passion for learning and studying the Bible and sharing Jesus with others. He spent countless hours listening to his favorite bible scholars, reading, and researching on his computer and bible. He loved his church, First Baptist Church of Indian Trail. He was a member of the choir and loved to use his deep voice to sing bass. Don had been raised a Methodist and had been used to a small church, but once he came to FBCIT he was amazed and couldn’t believe the love and how he felt the spirit of God there. Don was proceeded in death by his dad, Gene Austin Frederick. He is survived by his wife, Kathy Hamrick Frederick; mother, Betty Frederick, sister, Teri Hughes (Keith); son, Bryan Frederick (Michele); daughter, Jessica Isley (Mike); daughter, Tracy Williams (Ronald); daughter, Kimrey Frederick; stepsons, Wayne Small; Kenny Small; and Michael Small. He had 8 grandchildren; Austyn and Skylar Frederick, Noah Isley, Amiyah, Aubrie, Ava, and Aria Williams, and Addelynn Long ; 5 step grandchildren; Gracie and Rylan Isley, Marshall Small, Felix Shrader and Raiden Palmer. A celebration of Don’s life will be held at 12:00 pm, Saturday, January 8, 2022 at Mitchell’s Grove United Methodist Church, 3511 M.L.K, Jr. Dr., High Point, NC. The family will receive friends one hour prior to the service at the church. The family request those who wish to express sympathy to consider making a donation to Cameron’s House of Hope with First Baptist Church Indian Trail in Don’s memory. Donations can be made online – www.fbcit.org.

Donald Eugene Frederick, loving husband and father went to be with Jesus on Monday, January 3, 2022 at Novant Health Presbyterian Medical Center, Charlotte, NC after fighting a battle with COVID. His wife of eight years and his children were... View Obituary & Service Information

The family of Donald Eugene Frederick created this Life Tributes page to make it easy to share your memories.

Donald Eugene Frederick, loving husband and father went to be...

Send flowers to the Frederick family.