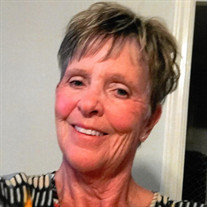 Dora Dennise “Denny” Matzke, 72, of Matthews, passed away on Friday, December 3, 2021 at home. Denny was born on January 2, 1949 in Fulton, New York to Bernice and Richard Smith. She attended and graduated from Phoenix Central High School in upstate New York. In March of 1998, she married her high school sweetheart, Robert Matzke. Her love of people came from a large family of 4 sisters and 3 brothers: Dianne, Darcy, Donna, Debbie, Reid, Rick and Regan. She often talked about growing up and having large family gatherings. In later years the gatherings got even larger with spouses and nieces and nephews. Denny’s love of people made her work at the Alltel/Windstream telephone company enjoyable, always dressed in perfectly matched outfits. As a customer service representative, she enjoyed talking to customers and co-workers. Her 49 year career at the phone company saw her move in 1996 from Fulton in upstate New York to Matthews, North Carolina. Her immediate family grew and settled in the Charlotte, North Carolina area. Her sons, Dean, Dennis, Darren, Dana and step-son Jason with their wives and children have enjoyed many family holidays together. Denny’s greatest enjoyment of people came with being a Grandmother. She was fondly called “Nana” by her 9 grandchildren: Lora, Devin, Sabrina, Katja, Sadie, Anna, Amelia, Jacob, and Ilana. They will always remember trips camping, fishing, times at Myrtle Beach, Carowinds and sleepovers at Nana’s. In her retirement she was very busy on social media keeping up with all of her children, grandchildren, family, friends and co-workers. She was a proud member of Stallings United Methodist Church. Denny will always be loved and missed by all. A Celebration of Denny’s life will be held on Thursday, December 9, 2021 at 2:00 p.m. at Stallings United Methodist Church. She will be laid to rest in Jacksonville Rural Cemetery in Phoenix, New York in May of 2022. On-line condolences may be left for the Matzke family at www.heritagecares.com

Dora Dennise &#8220;Denny&#8221; Matzke, 72, of Matthews, passed away on Friday, December 3, 2021 at home. Denny was born on January 2, 1949 in Fulton, New York to Bernice and Richard Smith. She attended and graduated from Phoenix Central... View Obituary & Service Information

The family of Dora Dennise "Denny" Matzke created this Life Tributes page to make it easy to share your memories.

Send flowers to the Matzke family.