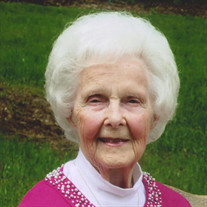 Dorothy Jane Drye Paxton, 100 years old, passed away on July 21, 2021 at home surrounded by her family. She was born in Stallings on October 26, 1920 to the late Margaret Hall and P D Drye, one of ten children. Dot as she was known by her family and friends was a life-long member of Stallings United Methodist Church in Stallings, where her grandparents were founding members. Dot was married to the love of her life, Clyde Paxton for 55 years prior to his passing in 1995. She was also preceded in death by their son, Clyde Douglas Paxton who died from Polio at the age of 5. Survivors include her daughters: Gayle Paxton Boles (John) of Matthews and Donna Paxton Smith (the late Jimmy Smith) of Stallings; and sons James David Paxton of Port Charlotte, FL, and Ike Paxton (Terri) of Midland. Her grandchildren are Laura Anne Boles, Lesli Boles Kolvisto (Eric), Elizabeth Boles Bankett (Christian), Meredith Paxton Davis (Garrett), Jason Paxton Smith (Allison), Brandon Paxton Smith (Natalie), Sara Paxton Snow (Brandon), Emily Paxton Chesser (Branden), Adam Douglas Paxton (Brittney), as well as 21 great-grandchildren and twins due on Dot’s birthday. She has a surviving sister Arlene Drye Surratt of Chesapeake, VA. Visitation will be held on Saturday, July 24, 2021 at 10:00 am. with the funeral service beginning at 11:00 a.m. at Stallings United Methodist Church with Dr. Rev. Scott Ireland and Rev. Philip Cole officiating. Dot will be laid to rest alongside her husband and son at Forest Lawn East Cemetery in Matthews. For those unable to attend either the visitation or service, it will be live streamed from the church by following this link: www.stallingsumc.org then click on facebook live services and finally click on Dorothy Paxton. THIS LINK WILL NOT BE AVAILABLE UNTIL RIGHT BEFORE THE SERVICE. The family wishes memorial donations be made in Dot’s memory to Stallings United Methodist Church, 1115 Stallings Rd., Matthews, NC 28104 On-line condolences may be left for the Paxton family at www.heritagecares.com. Heritage Funeral Home – Weddington is honored to be able to serve the Paxton family.

Dorothy Jane Drye Paxton, 100 years old, passed away on July 21, 2021 at home surrounded by her family. She was born in Stallings on October 26, 1920 to the late Margaret Hall and P D Drye, one of ten children. Dot as she was known by her... View Obituary & Service Information

The family of Dorothy Drye Paxton created this Life Tributes page to make it easy to share your memories.

Send flowers to the Paxton family.