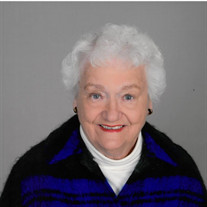 Edith Charlotte Ucko Meier (Edi) was born March 23, 1933 in Berlin, Germany and passed away on October 13, 2021. Her parents were Hans Ucko and Margerete Ucko (Eiring). Edi was married in 1959 to Harold (Hal) Meier (deceased) at St. Andrews Lutheran Church in Chicago, Illinois. They have three children: Richard Edward (Lora) of Houston, TX; Susan Elizabeth Roth (Brad) of Milford, CT; and Steven Thomas (Lina) of Charlotte, NC; and seven grandchildren: Philip and Thomas Meier; Julia, Jaelyn and Lauren Roth; and Landen and Jonah Meier. Edi was an only child and immigrated from Germany with her parents in 1936 at the age of three seeking the security of the United States. Her father - in a letter to her of this decision to come to America – wrote, “America has given us much, not only shelter and food, but also freedom of living and worship. We owe her our devotion and love.” Edi certainly took those words to heart and cited her parents' courage and foresight as her good fortune. Upon graduation in 1955 from Valparaiso University, Edi began her career as a legal secretary at the Chicago Title and Trust Company. She continued this line of work at several law firms in the New Jersey area. Edi raised her family with Hal, first in Indianapolis, IN and Middletown, NY, and spent 39 years in Fanwood, NJ. Having retired to North Carolina in 2009, she quickly developed many close friendships at the Polo Club in Matthews, NC. Long time members of Redeemer Lutheran Church, Westfield, NJ, Hal and Edi found a spiritual home in Charlotte at Ascension Lutheran. A memorial service in her honor will be held at a later date. An avid painter, Edi was intelligent, independent and a woman of great faith; she will be deeply missed for her love and devotion to her family and friends. In lieu of flowers, please send donations in memory of Edith Meier to Lutheran World Relief at https://lwr.org or Valparaiso University Scholarship Fund at Valpo Scholarship.

The family of Edith Charlotte Ucko Meier created this Life Tributes page to make it easy to share your memories.

Send flowers to the Meier family.