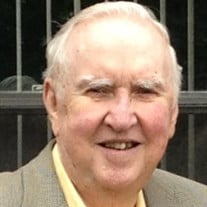 Edward (“Ed”) Bernard Clancy, 92, passed away at his home in Matthews, NC on November 30, 2021, culminating a wonderful life driven by family, faith, and service. Ed was born on April 19, 1929 to Anna and Edward Joseph Clancy in Richmond (Staten Island), NY. He was a graduate of Port Richmond High School and Fordham University. Ed served as Army Artillery Sergeant during the Korean War. His professional career started with the National Cash Register Corporation, where he forged many lifelong friendships. Ed met Catherine Gallagher at the New Jersey Shore in 1962. They were married in 1964 and settled in Fanwood, NJ, where they resided for fifty years raising two sons, Matthew and Thomas. Ed and Cathy moved to Charlotte, NC in 2016 joining Thomas and his family. Ed loved life and people. He spent many memorable days with friends and family at their vacation home in Avon-by-the-Sea, NJ. Ed was a passionate New York sports fan, a season ticket holder of the NY Football Giants for over fifty years. Tailgate parties with family and friends often eclipsed the games themselves. While he cherished his beloved 50-yard line Giants tickets, Ed’s greatest treasure was his family. He never missed his sons’ sporting or music events. As a Boy Scout troop leader, he shared his love of the outdoors, fishing and community service. Ed’s greatest legacy is his grandchildren. He beamed with pride during Ryan’s performances at Carnegie Hall and the Kennedy Center and Shaylyn’s graduation from UNC Chapel Hill and doctoral pursuit at University of Virginia’s School of Medicine. His smile was ear to ear when he played “restaurant” with Campbell and Frannie in the backyard or watched them show off their new gymnastics, soccer, swimming or reading skills. Ed had a wonderful sense of humor, yet he is distinguished by his care and thoughtfulness towards others. His commitment to service and his faith were exemplified in his roles as Chairman of the Advisory Board of Catholic Community Services of Union County, NJ; President of Immaculate Heart of Mary Holy Name Society; Eucharistic Minister to Hope Hospice; Volunteer with Surrogates of Union County; and many other causes. Ed is preceded in death by his parents and son, Matthew. He is survived by his wife, Cathy; sister, Patricia Wakeham (Jack); daughter-in-law, Emily Clancy, and their son, Ryan, and daughter, Shaylyn; son, Thomas Clancy (Laura) and their daughters, Campbell and Frances. The family plans to hold a memorial service at Immaculate Heart of Mary Church in Scotch Plains, NJ in 2022 with the date and time yet to be determined.

The family of Edward B. Clancy created this Life Tributes page to make it easy to share your memories.