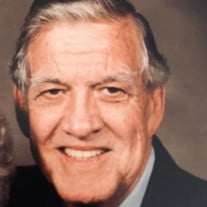 Ed passed away peacefully at Asbury Care Center early Friday morning, September 17, 2021. He was 95 years old, having been raised in Kannapolis, NC, and living most of his life in Charlotte, NC. Ed was predeceased by his parents, Edward, Sr., and Lena Messer; his sisters Lillian Long; Zoe Byrd and Phyllis Alexander. He is survived by his younger brother “Bill” Messer of Kannapolis, NC. Ed graduated from J.W. Cannon High School where he was privileged to be the Senior Class President; served in the United States Marine Corps during WWII, and attended Kings Business College for two years, earning a degree in Accounting. In 1957 he played 3rd baseman and won the Softball Championship in Charlotte. Thereafter, he experienced a lifelong love of baseball. Ed retired from Collateral Control Corporation in 1978 and volunteered at Charlotte Rehabilitation Hospital and Wesley Nursing Center in Charlotte for 12 years. Ed Messer loved his church! Ed held a membership at Plaza Presbyterian Church for over 65 years. He was married there, and served as Deacon, Elder, Sunday School Superintendent, and was President of the Covenant Bible Class. He enjoyed being in the theatrical group “Plaza Players” for many years. Ed is survived by his devoted wife, Ellen Shinn, whom he married in 1948 and was proud to celebrate their 73rd Wedding Anniversary on February 14th, 2021. Ed is also survived by his three sons: James Edward (Mott -deceased-, Norma), Stephen Wayne (Jeanne), Michael Burtley (Theo); is grandfather to Kate (Jonathon) Hunter, Graham (Kelli) Messer, Larisa (Robin) King, Glenn (Juliet) Rollins, III, Paul (Erin) Messer. He was great-grandfather to Sylas and Phife (Hunter); Taylor, Meredith, Audry, and Alyssa Rollins; and Kailyn, Dylan, and Charlotte Messer. As an older man, Ed confessed his pranks, his truancy, and his mischievous behavior in a joking and comical manner. He loved to tell stories and could laugh at himself in good humor. He had the heart of a United States Marine in the manner in which he stayed strong and determined in his last years when he struggled with the body of the aged. Ed will be missed by his family, particularly his wife, Ellen, who lovingly cared for him until his last days. There will be a graveside service for the immediate family. In lieu of flowers, donations can be made to the charity of your choice.

Ed passed away peacefully at Asbury Care Center early Friday morning, September 17, 2021. He was 95 years old, having been raised in Kannapolis, NC, and living most of his life in Charlotte, NC. Ed was predeceased by his parents, Edward, Sr.,... View Obituary & Service Information

The family of Edward Burtley Messer Jr. created this Life Tributes page to make it easy to share your memories.

Send flowers to the Messer family.