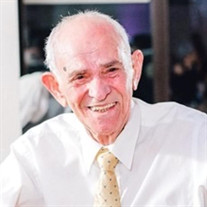 Indian Trail, North Carolina, Eleftherios Keramidas, age 98, passed away on September 6, 2021 peacefully. Eleftherios was a loving father, husband, grandfather, and great grandfather. Eleftherios was born on August 1st, 1923 in Thessaloniki, Greece. Eleftherios was very proud in serving and sharing his experiences while in the Greek army during the Greek Civil War of 1945. He became a mechanic and worked not only in Greece, but Brazil, and finally in New York where he owned his own gas station and car repair shop for over 40 years. He is survived by his son, Angelo Demetriou, his daughters, Katina Smaragdis and Stamatia Chinboukas, his grandchildren Anna Thompson, Eleftherios (Teddy) Smaragdis, Helen Amadeo, Nicholas Demetriou, Athenia Chinboukas, and Nikko Chinboukas and great grandchildren Zoey Katina Thompson, Demetri Thompson, and Victoria Berk. He and his late wife retired to Indian Trail, NC in 1996 after many years of traveling along the east coast in their motorhome. He enjoyed many years with his family on vacations in the motorhome. Eleftherios looked forward in helping his son-in-law, Nikitas Smaragdis with building and setting up annual Christmas displays. He particularly enjoyed having a few cocktails with Nikitas to end the day. He especially enjoyed spending time with his family and friends. Funeral Services will be held at 11:30 AM, Friday, September 10, 2021, at St. Nektarios Greek Orthodox Church. Visitation will be one hour prior at the Church. Interment will follow the service at Forest Lawn East Cemetery. In lieu of flowers, donations may be made to Young At Heart at Saint Nektarios Greek Orthodox Church at 5108 Kuykendall Road, Charlotte, NC 28270.

The family of Eleftherios Keramidas created this Life Tributes page to make it easy to share your memories.

Send flowers to the Keramidas family.