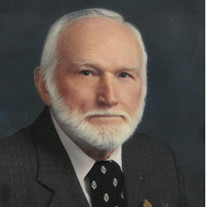 Everett Vance “Otto” Overcash 99 of Charlotte passed away February 13, 2022. He was born in Charlotte, NC on February 15, 1922 to the late Otho William and Minnie Moore Overcash. Mr. Overcash was a graduate of Central High School and served in the United Sates Navy and US Naval Flight School. He was married to the love of his life for 69 years Mary Cousart Overcash, 1945 to 2014 the year of her passing. Mr. Overcash was an Architectural Designer for the Ervin Company and Sales & Marketing Partner with Kirk Cousart & Associates, later retired President of Process Air Conditioning & Equipment Company, Inc. (P.A.C.E., Inc.) Mr. Overcash was a member of Calvary Church and a member of the Calvary Players , performing in such productions such as Gloria and Passion Play. Playing Santa Claus and telling the story of Jesus birth. He also enjoyed playing golf as a young adult, was an Award winning Jitterbug/Swing Dancer. He enjoyed vacationing at Hilton Head Island, volunteering with the Sharon Volunteer Fire Department. He was a deacon with Calvary Church and worked with the Homeless Ministry Men’s Prayer Breakfast. Mr. Overcash will be remembered as a devoted husband and amazing Father. He never met a stranger and would give you the shirt off his back; he was a mentor to his children and their friends. He was an attentive and doting, selfless grandfather with an infectious smile, gentle spirit and always happy demeanor, a lover of all people no matter of race or creed. Member of the OASIS Shriners Club, ASHRAE. He was a lover of cats and dogs and was never without one. Survivors include his children and their spouses; Victoria Overcash Moore and James Moore, Pat Overcash Pittman and Michael Pittman, Kirk Cousart Overcash and Cecile (Cele) Overcash, Phyllis Overcash. William Otho Overcash (deceased) Grandchildren; Christopher Landon, Mara Heilker, Stephanie Heilker, Heidi Heilker, Dustin Overcash and Kristin Wall. Great-Grandchildren; Sutton Lea, Kyla Jenkins, Koen Birkmaier, Naomi Birkmaier, Thomas Wall and Great-Great Grandchild; Bentley Jenkins, Mary margaret Landon and Andrew Vance Landon. Mr. Overcash was predeceased by a sister Dorothy Smith. Graveside services will be held Thursday February 17, 2022, 11:00AM at Forest Lawn East Cemetery, 3700 Forest Lawn Drive Matthews, NC

Everett Vance &#8220;Otto&#8221; Overcash 99 of Charlotte passed away February 13, 2022. He was born in Charlotte, NC on February 15, 1922 to the late Otho William and Minnie Moore Overcash. Mr. Overcash was a graduate of Central High School... View Obituary & Service Information

The family of Everett Vance Overcash created this Life Tributes page to make it easy to share your memories.

Send flowers to the Overcash family.