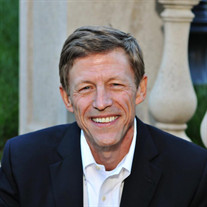 Garth Kleber Dunklin passed away on Thursday, January 14, 2021. He was born in El Dorado, Arkansas, to Pat and Kleber Dunklin. He is survived by his wife Helen, their children Macy and Garth Jr., and his half-brother John Ducote Dunklin. Garth was always loyal to his commitments and his associations and pursued them to the fullest. Known for his intelligence and hardworking attitude, Garth was remarkable from a young age when he received the Morehead-Cain Scholarship to attend University of North Carolina at Chapel Hill. During his time on campus, he joined the Kappa Alpha Fraternity, where he was the chapter president. Even after graduating, his love for the brotherhood never dwindled as he continued to serve in numerous capacities and participated in Kappa Alpha National. After receiving his Juris Doctor in 1988 from the school of law, Garth always made time to return for Tarheel football games and alumni gatherings whenever he could. Live sports were Garth’s favorite pastime. As a kid, he played soccer at Episcopal High in Virginia, a passion that his son, Garth Jr., also pursued. When his own kids joined recreational soccer leagues, Garth became the coach. He involved himself in the shared passions with his children whenever he could. With four season tickets to the Carolina Panthers, there were many Sunday afternoons with friends and family spent in the nosebleeds of the stadium. When he wasn’t at a sports game or work, he could be found at the family home in Waynesville. For someone who could work so hard so consistently, it was a wonder to see him lounged in a chair, computer on standby, staring out at the Blue Ridge. Nevertheless, Garth’s greatest passion was his work and his clients. Garth’s philosophy for work was that being actively involved made one a better and more practiced person. Moving to Charlotte shortly after receiving his J.D., he met his wife, Helen, and began building his family and legacy. As a hardworking, loyal lawyer, Garth became a pivotal player in the real estate law community at large. His impressively extensive list of awards, recognitions, committee memberships, volunteer work, certifications, and creations are too great to all include. However, his colleagues remember him most notably as a co-founder and member of Venn Law Group, the chair in perpetuity of the NC Realtors commercial forms committee, the chair of the Rules Review Commission, for co-authoring the commercial version of the NCRECs mandatory update, and many recognitions such as being the Realtor of the year by CRCBR. Among all these accolades, Garth’s greatest passion was teaching. For over 20 years, Garth taught commercial real estate classes for CRCBR and NCREC. He was a cherished instructor for CCIM, where he had several other commitments. He could be found smiling brightly in the classroom, eager to address and research any questions. Garth had begun teaching for UNC Charlotte, where both of his children attended, as an instructor for the Belk College of Business Masters of Science in Real Estate Program. He had hoped to continue teaching there as his own kind of retirement, never one to actually stop working. There were many nights and weekends where Garth sat at the kitchen table, the living room coffee table, and his office, surrounded by piles and piles of paper. They may have been cases, manuals, student essays, or various resources for home improvement projects. He always worked hard in whatever he did because, in addition to being his best he for his communities, one of his greatest wishes was for his children to choose lives based on what would make them happy. He encouraged them to follow hobbies, try out any sport, and excel in what they love. While neither of them may become lawyers, they live on to fulfill his dream of finding fulfillment and happiness in what they do, just as he did until the very end. In lieu of flowers, please make donations to the American Cancer Society (https://www.cancer.org/involved/donate/memorial-giving.html Funeral services will be held on Saturday, January 23, 2021 at 11:00 AM at Heritage Funeral Home, Weddington Chapel, 3700 Forest Lawn Drive, Matthews, NC 28104. For those unable to attend the funeral services, please check Mr. Dunkiln's page here for a link to the service being Livestreamed beginning at 10:55 AM Saturday morning under the media tab.

Garth Kleber Dunklin passed away on Thursday, January 14, 2021. He was born in El Dorado, Arkansas, to Pat and Kleber Dunklin. He is survived by his wife Helen, their children Macy and Garth Jr., and his half-brother John Ducote Dunklin. Garth... View Obituary & Service Information

The family of Garth Kleber Dunklin created this Life Tributes page to make it easy to share your memories.

Send flowers to the Dunklin family.