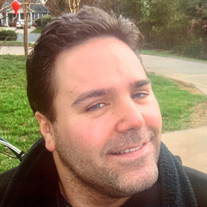 Glenn Russell Rothgeb passed away peacefully at the age of 52 on April 2, 2022. His mother Mary Ann, stepfather Elbert and sister Deanna, in addition to one of his oldest and dearest friends, were by his side. Glenn was born in Manassas, VA on February 15, 1970, to Mary Ann and Donald Rothgeb. He is preceded in death by his father and his maternal and paternal grandparents. He is survived by his mother, stepfather, sister, and two stepbrothers Brian and Ross Edwards. Glenn had a car accident at the age of 26 which left him a quadriplegic. He was unable to move from his shoulders down. He used a sip/puff device straw on his wheelchair to navigate it and used a mouthstick for written communication on his computer and phone, typing just one letter at a time. Despite his physical disabilities, Glenn's knowledge, wit, and positivity shined brightly through. Anyone that knew him well was amazed at his incredible memory on all things he cared about. He could quote hundreds of obscure movie lines verbatim, share musical history and facts, and principles and details of most world religions. He did it with gusto and humor. Either via a great talk or a deep Facebook post, his intellect and passion shined through. Glenn spent the majority of his life in Charlotte and considered it his home. He furthered his education at CPCC. Glenn loved to meet people, was very social and had so many wonderful and lifelong friends. Glenn’s family and friends saw him face more hardships than anyone should ever have to endure. He dealt with so much adversity and serious health issues, and overcame so many obstacles. The most important thing to Glenn was his independence and he succeeded in living his life with as much independence as one could possibly have in his situation. He may not have had his physical body working for him, but he had his brilliant mind, and he was such a fighter! Words cannot express how much everyone will miss Glenn and his sense of humor, intellect, and passion for so many things. He made the best of his life and truly was and always will be a hero and inspiration to so many. A memorial service to honor Glenn will be held at 3PM on Saturday, April 9, 2022 at Heritage Funeral Home - Weddington Chapel, 3700 Forest Lawn Dr. Matthews, NC 28104.

Glenn Russell Rothgeb passed away peacefully at the age of 52 on April 2, 2022. His mother Mary Ann, stepfather Elbert and sister Deanna, in addition to one of his oldest and dearest friends, were by his side. Glenn was born in Manassas, VA... View Obituary & Service Information

The family of Glenn Russell Rothgeb created this Life Tributes page to make it easy to share your memories.

Glenn Russell Rothgeb passed away peacefully at the age of 52...

Send flowers to the Rothgeb family.