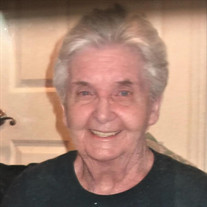 Irma Lorraine Gill, 86, of Charlotte, NC, passed away on May 23, 2021 at home. Mrs. Gill was born on April 8, 1935 in Smithville, Canada, daughter to the late Kenneth and Veda Snow Crowell. Irma graduated from Shelbourne High School and received her Associates Degree in Arts from the County College of Morris. She was married to the late John Davis Gill on April 15, 1961 and was happily married for 55 ½ years at his passing on December 24, 2016. From Smithville, Canada, Irma moved to Kearny, NJ then bought a house with John in Parsippany, NJ, and in later years retired to Myrtle Beach, SC. She worked as a Patent Secretary and a Medical Scribe before becoming a homemaker. Being able to spend time with and take care of her family brought her so much joy. Aside from tending to her home and family, she traveled with her late husband John, and she enjoyed reading, playing cards, and crocheting. We were all especially proud of her college graduation, which she achieved in her fifties. She was always pleasant to be around, very supportive of her family and will always be remembered as being a loving mother and grandmother by her children and grandchildren. Irma was a member of the United Methodist Church of Parsippany. She loved her cats: Sandy, Smokey, Toby & Agatha, Rusty and Sandra & Sarah. They were not just pets to her, but family. Survivors include her 2 loving daughters JoAnn Lynn Smith and husband Thomas Alfred Smith and Pamela Jean Gill; beloved grandchildren Tyler Davis Smith and Rebecca Lynn Smith; brother Earl Crowell and wife Moira Crowell and their sons Kenneth and wife Lily, Douglas and Alan. She is also survived by two sister-in-laws Ellen Thompson and her daughter Jennifer and family; and Karen Kindley, her husband Phil Kindley, and Karen's children, Lori and Michael and respective families; three brother-in-laws Douglas Gill, David Gill and his wife Ann, and Jimmy Low and his wife Lois Low and their two daughters, Kiersten and Bonnie and families. Special friends who are still living are Lois Corbo, Lois Bright, Joan Handte and Joan Kiely. Memorials may be made to the Dementia Society of America. Private burial was held at Forest Lawn East Cemetery in Weddington. An online guestbook is available at www.heritagecares.com.

Irma Lorraine Gill, 86, of Charlotte, NC, passed away on May 23, 2021 at home. Mrs. Gill was born on April 8, 1935 in Smithville, Canada, daughter to the late Kenneth and Veda Snow Crowell. Irma graduated from Shelbourne High School and received... View Obituary & Service Information

The family of Irma Lorraine Gill created this Life Tributes page to make it easy to share your memories.

Send flowers to the Gill family.