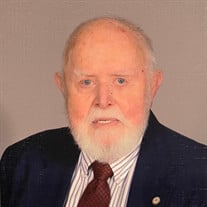 AIKEN, JAMES BLAINE, SR. passed away peacefully at Novant Matthews Medical Center Hospice in Matthews, NC on November 25, 2021 after a long and difficult battle with Alzheimer’s Disease. He was 83. Jim was born in Bridgeport Hospital in Bridgeport, CT on February 13, 1938 to James Barnett Aiken and Peryll Harriet Preuss Aiken of Stratford, CT. He was predeceased by his parents and two siblings, David and Nancy. Jim graduated from Stratford High School and the University of Wisconsin at River Falls with a degree in Industrial Arts. He served in the US Navy as a reservist and was honorably discharged. He taught Industrial Arts in the Shelton School System at Shelton High School as well as at Roger Ludlowe High School in Fairfield. He took a position with General Motors’ Pontiac Motor Division and remained with General Motors for 30 years, retiring as Manager of the General Motors Training Center in Tarrytown, NY. While with General Motors, in the 1980’s, he spearheaded one of the first public/private partnerships between an auto manufacturer and an institution of higher education by creating a corporate sponsored program for automotive technical education at Hudson Valley Community College and then expanded the program to various community colleges in the northeast and mid-Atlantic. This program became a model for automotive technical education in community college systems across the country to this day. After retiring from GM, he continued working passionately to promote automotive technical education programs at the high school and community college level working with the Greater New York Auto Dealers Association, Platt Technical High School in Milford, CT and finally at Gateway Community Technical College in New Haven and North Haven, CT. Jim was an avid woodworking, camping, boating and automotive enthusiast and a serious Green Bay Packers fan. He enjoyed community activities and was active in his earlier years in the White Hills Volunteer Fire Department in Shelton, CT as well as in Freemasonry. He was a 32nd degree Freemason and a Past Master of King Hiram Lodge #12 in Shelton, CT as well as a Past Associate Grand Marshal for the Grand Lodge of Connecticut. He was also very active in the Anglican Church. Jim is survived by his devoted wife of 58 years, Judith Clark Aiken of Matthews, NC, previously of Shelton and Stratford, CT, who took incredible care of him his entire life and especially during the past 6 years while he suffered from this terrible illness. He is also survived by his sons John Matthew Aiken, of Matthews, NC and James Blaine Aiken, Jr. and his cherished granddaughter Emma Julia Aiken both of North Haven, CT, his sister Barbara “Bunny” Aiken-Johnson of Ogden, UT and many nieces, nephews, extended family and friends. The family would like to thank the wonderful nurses, doctors and staff at Novant Matthews Medical Center for the tremendous level of compassion and care they provided to Jim during his time in the hospital and in hospice. A private service will be held at Heritage Funeral Home in Indian Trail, NC. In lieu of flowers, the family asks that donations be made in his name to Masonicare Health Center, 22 Masonic Avenue, Wallingford, CT 06492 or use this link https://www.masonicare.org/support-masonicare/donate-now.

AIKEN, JAMES BLAINE, SR. passed away peacefully at Novant Matthews Medical Center Hospice in Matthews, NC on November 25, 2021 after a long and difficult battle with Alzheimer&#8217;s Disease. He was 83. Jim was born in Bridgeport Hospital... View Obituary & Service Information

The family of James Blaine Aiken SR created this Life Tributes page to make it easy to share your memories.

Send flowers to the Aiken family.