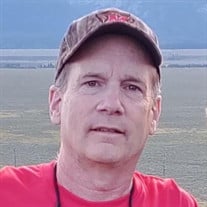 James Brent Ekey “Jim”, 61, passed away September 15, 2021 at his home in Matthews, NC. Jim was born March 12, 1960, in Wheeling, WV to Norma Jean Ekey-Brobyn, and the late John Quayle Ekey. Jim attended Central Columbia High School (The Fightin’ BlueJays) in Bloomsburg, PA where he played basketball, ran cross country and competed in track and field. He went on to earn his BA in Business, Summa Cum Laude from Lycoming College in Williamsport, PA. In the summers he co-owned and operated a successful painting business in Bloomsburg – J&D Painting. Following college, Jim moved to Maryland, started working at IBM and then transitioned to real estate sales where he worked for several years. Later he worked as a loan officer, sales rep, tech support team leader and business owner. Jim was a die-hard sports fan and rooted for a geographically-diverse set of teams. Although it was hard to understand the connections between Baltimore, Ohio, Louisville, Minnesota and Los Angeles, he was not a fair-weather fan – there was a reason for every allegiance. He was always seen in one of his many teams’ shirts and hats. His favorites were the Baltimore Ravens, Los Angeles Lakers and Maryland Terrapins. He was a basketball aficionado and loved the game! When he wasn’t rooting for his favorite teams, he was an avid disc golfer, always striving for a longer throw and lower score. Jim also enjoyed woodworking projects around the house. Even though he loved his sports, Jim’s true passion was his boys. He coached every one of their basketball and soccer teams. Even though he knew nothing about soccer, it was important to him to learn the sport so he could be a great coach to the boys. Whether coaching or watching, he was always cheering them on. He loved his boys more than anything in the world and relished making special memories on vacations to places like Ocean City, NJ, Greenville, SC, and the annual trip to a cabin in Boone, NC to cut down the family Christmas tree. He was a Trail Guide with Trail Life USA for several years enjoying hiking, camping and outdoor adventures with his sons. They were blessed to share a memorable week in Yellowstone in 2019. Those that knew Jim knew how special his friends were to him. He made friends with everyone, and strangers were just people that he hadn’t befriended yet. He loved to talk to anyone, especially about sports, and loyally pursued his friends, even if they didn’t live nearby. Jim was also a member of Christ Covenant Church since 2005 where he was in several Covenant Groups and volunteered as a Worship Coordinator, so he could greet people as they arrived. Aside from human companions, he had a love for Shelties but never had just one because he wanted them to have friends, too. First it was Kristi & Kelly, then Holly & Paddi, and most recently Duffy & Ember. Left to carry on Jim’s memory is his wife of 28 years, Eileen Marie Ekey; twin sons Kyle Alexander and Jared Taylor, and mother Norma Jean Ekey-Brobyn. He is also survived by his brother John Sheldon Ekey; sister Beverly Ann (Bob) Langley; niece Michelle Jeffries; nephews Matthew Ekey, Michael Langley and Alex Langley. Services for Jim will be held at Christ Covenant Church, 800 Fullwood Ln, Matthews, NC 28105 on Saturday, September 25th. Visitation will be held from 11 AM - 12 PM, with funeral service starting at 12 PM. A private family only burial will follow the service. There will also be a memorial service on October 30th at Wesley United Methodist, 130 W 3rd St, Bloomsburg, PA 17815. Details TBD. In lieu of flowers, please consider a donation to one of the following charities in Jim’s honor: Next for Autism, https://www.nextforautism.org/donate/; Autism Society of NC, https://www.autismsociety-nc.org/donate-online/, or the American Cancer Society https://www.cancer.org/involved/donate.html.

The family of James Brent Ekey created this Life Tributes page to make it easy to share your memories.