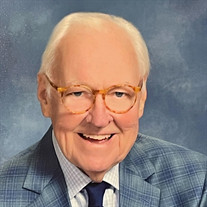 Jim Ferron Ft. Mill, SC James C. Ferron of Sun City Carolina Lakes, Fort Mill, SC, passed away peacefully at age 89 on Sunday July 18, 2021. A Mass of Christian burial will be held at 12pm on Monday, July 26, 2021 at Our Lady of Grace Church with Father Kirby Celebrant. The family will receive friends following the service. Inurnment will be privately held at St. Matthew Catholic Church Columbarium. Jim was born in Appleton, Wisconsin to the late William J. and Mary Salmon Ferron and was the youngest of four sons (William, Richard, Robert). He attended St. Mary’s Catholic Grade School (Appleton), St. Mary’s High School (Menasha), Marquette University and in 1954 graduated from the University of Notre Dame, where he earned a bachelor’s degree in Business. After college, he learned the clothing business from his father, and eventually became a partner in Ferron’s Clothing, an up-scale men’s clothing store, with his father and brothers Dick and Bob. In 1959, he moved to Green Bay, WI to manage a second men’s clothing store. He later in life started his own plastic molding business, which he sold to Sonoco Products Company of Hartsville, SC in 1981. Jim married Carol Jean Voissem of Menasha, WI in 1954. They enjoyed 62 years of marriage and five children together until her passing in 2016. A dedicated Green Bay Packer fan and season ticket holder, Jim was one of the actual attendees at the famous “Ice Bowl” game between the Packers and Cowboys in 1967. Jim was a great lover of music; popular oldies, classical and opera. In high school and college, he was an active band member, playing the clarinet, alto saxophone and (one year) the oboe. Jim is survived by his four sons, Peter (Mary) Ferron of Clarkridge, AR, John (Leah) Ferron of Dublin, OH, Mark (Tracy) Ferron of Petaluma, CA, Paul Ferron of Neenah, WI and one daughter, Jean (Brian) Hill of Charlotte. He is further survived by eleven grandchildren: James, Elizabeth, Alastair, Katrina, Andrew, Emily, Juliette, Alexandra, Sam, Madison & Nicholas; and one great grandson Arthur. In lieu of flowers, memorial contributions can be made to Our Lady of Grace Catholic Church.

The family of James Clement Ferron created this Life Tributes page to make it easy to share your memories.