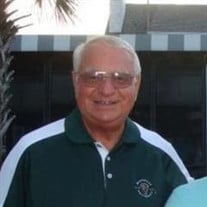 James Madison Jones, 88, of Pineville, North Carolina, passed away peacefully on February 13, 2022 at Atrium Health Center in Charlotte, NC. He is survived by his wife of 50 years, Susan Wood Jones; his daughter, Ashley Susan Gragg and her husband, Rick of Hilton Head, SC; his son, Brian Madison Jones and his wife, Shannon of Mount Pleasant, SC; and three grandchildren, Corey Gragg, Brenna Jones, and Cora Jones. Named for the nation’s fourth president, Jim was born on April 23, 1933, in Coalwood, West Virginia. Jim, or Uncle James as he was known to so many in his large family, was preceded in death by his parents and all eleven of his siblings, 7 sisters and 4 brothers. His dozens of nieces and nephews and grandnieces and grandnephews reside throughout West Virginia, Virginia, Maryland, Tennessee, the whole South, and beyond. Jim graduated from Big Creek High School in War, West Virginia before attending college and graduating from Marshall University in Huntington, West Virginia in 1955. Jim enlisted in the U.S. Army after graduation and was honorably discharged in 1958. He came to Charlotte where he took a job as an accountant in 1964 for the Celanese Corporation, later Hoescht Celanese, where he worked for the next 32 years before retiring in 1996. Jim met his wife, Susan, at Celanese and they married in 1972, celebrating 50 years of marriage on February 12, 2022. Jim lived his entire professional life in Charlotte and deeply cared for his neighbors and his community. He loved the Carolina Panthers, the Charlotte Hornets, the Marshall Thundering Herd, and enjoyed tailgating, family vacations, word searches, as well as reading the newspaper, tending to his lawn, and enjoying a cold scotch and soda at sunset. Jim was naturally neat, organized, and detailed. He was responsible, decent, and loyal to his kin no matter how close or far away they were. He had taste and tact and he was a gentleman to all. The great joys of his life were his wife, his children, his grandchildren, and his dachshunds. A service for Jim will be held at 11:00 AM on Saturday, February 19, 2022 at Heritage Funeral Services, 3700 Forest Lawn Drive in Matthews, North Carolina. Jim loved flowers, so send them to Heritage Funeral Services as you may.

James Madison Jones, 88, of Pineville, North Carolina, passed away peacefully on February 13, 2022 at Atrium Health Center in Charlotte, NC. He is survived by his wife of 50 years, Susan Wood Jones; his daughter, Ashley Susan Gragg and her... View Obituary & Service Information

The family of James Madison Jones created this Life Tributes page to make it easy to share your memories.

Send flowers to the Jones family.