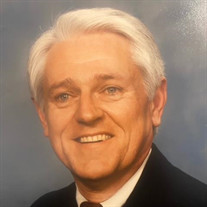 JAMES LINWOOD KNOWLES, JR. October 11, 1935. - March 7, 2022 It is with great sadness that the family of James (Jim) Linwood Knowles, Jr. announces his passing on Monday, March 7, 2022. Jim was born in Plymouth, North Carolina as the first child of James Linwood Knowles and Donnie Clifton Knowles. He attended Jamesville Elementary and High School where he was active in 4H Club, FFA, Beta Club and received an American Farmers Degree, a National Award. After high school graduation he enrolled at NC State University in Raleigh, NC to study agronomy intending to return to Plymouth and farm with his father after graduation. His future changed when he attended a dance at Greensboro College where he met Barbara Stockton who became his wife in 1957. It was love at first sight for both. After college graduation and marriage he fulfilled his military obligation by serving as a lieutenant in the Army. Jim then began what was an outstanding and fulfilling career in sales working for General Dyestuff, Otto B. May, and Ciba Geigy. After retirement from Ciba Geigy he help form a new company, PCI Associates, and also sold equipment for Dying technology. His career allowed him to do what he enjoyed most, meeting and making friends and solving programs for the textile industry. During the 64 years Jim and Barbara were married they had two beautiful children, son James Bradley Knowles and daughter Linda Katherine Knowles. Jim never met a stranger. He lit up any room he walked into with his outgoing personality and storytelling ability. He loved to give long answers to any question one might ask, which sometimes annoyed those of us who were impatient. Woodworking was a lifelong hobby of his. He built (heated) cat and dog houses, stereo cabinets, tree houses, furniture, and anything else anyone needed. He carried a “little red pocketknife” with him at all times, which he used to fix just about anything. He was proud of the fact that he could repair broken things himself - electrical, plumbing, mechanical - and share this talent with friends. Growing up near water, he had a natural love of boating. He had as much fun shopping for a boat to buy as he did actually owning one. Starting out with a Sunfish he gradually advanced to bigger and bigger boats ending up with a small yacht which he kept in Wilmington for cruising the intercostal waterway. The boats were named Folly 1, Folly 2 and Salty Dawg. When boating days ended, his interest turned to golf and the mountains. He and his family owned a house on Beech Mountain where they shared many wonderful years together. He loved his family with his whole heart and provided for their every need, supporting them in whatever endeavor they undertook. He was a devoted Christian. As a member of St. Stephen UMC for 48 years he served in every capacity. A self-assured man of great humility, he would not like for his awards, chairmanships, etc. to be listed. Just know that he lived a full and productive life filled with happiness, love and joy. He will always be missed by everyone whose life he touched and will live in our hearts forever. Jim is survived by his wife Barbara, children James Bradley (Brad) Knowles, Linda Knowles Davila, grandchildren Lara French (Steven) and Karla Santana-Knowles, great grandchildren Abigail, Angeli, Nathan and Aurora. A memorial service will be held on Saturday, March 19, 2022, 3:00 pm at St. Stephen United Methodist Church, 6800 Sardis Road, Charlotte. Visitation in the Narthex will follow. In Lieu of flowers, memorials may be made to St. Stephen UMC, Hospice of Charlotte, or a charity of your choice.

JAMES LINWOOD KNOWLES, JR. October 11, 1935. - March 7, 2022 It is with great sadness that the family of James (Jim) Linwood Knowles, Jr. announces his passing on Monday, March 7, 2022. Jim was born in Plymouth, North Carolina as the first... View Obituary & Service Information

The family of James Linwood Knowles Jr. created this Life Tributes page to make it easy to share your memories.

Send flowers to the Knowles family.