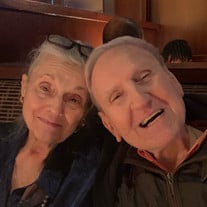 James R. Larcara, 88, of Matthews, NC passed away Thursday morning, April 21, 2022. James was born on October 24, 1933 in Passaic, NJ to the late Dominic and Regina Larcara. He attended Seton Hall University in South Orange, NJ, then on to Traphagen School part of Fashion Institute of Technology. Mr. Larcara also served in the United States Army, 1957-1959, and he was stationed in Schweinfurt, Germany. He met his beloved wife, Antoinette, at Holy Family Church in Nutley, NJ at a talent show and they were united in marriage on February 25, 1957 for a loving marriage of 65 years. After the Army he worked as a designer for Bloomingdale’s Stores in Short Hills, NJ, later in his career, he also owned British Pine Emporium furniture stores in Sarasota, FL and in Madison, NJ. Outside of the current Matthews, NC residence, Mr. Larcara also previously resided in Nutley, NJ, Morristown, NJ and Sarasota, FL. His first career interest was to become a radio announcer he had a great broadcasting voice. However, later, he chose the career path of interior design and he was excellent at his chosen profession; he was a master at the art of presentation and he had an impeccable gift to transform a space from ordinary to extravagant and lovely. In his retirement he loved to cook for his wife and family. His specialties were usually soups and salads with homemade dressings. He enjoyed entertaining family and friends with traditional Italian dishes during the holidays. He was a devoted husband, father and grandfather. For 50 plus years he was committed and devoted to the Baháʼí Faith. Mr. Larcara also loved anything related to the arts and he was a participant at The Visual Arts Center in Summit, NJ where, on occasion, he met some of his favorite artists. He is survived by his lovely wife, Antoinette Larcara, along with their three sons and their wives; Stephen (Laura), Alan (Lynn) and James (Marie); his grandchildren Mitchell, Jacob, Lindsay, Morgan, Jenna, Cole and James Jr. and many nieces and nephews. He was preceded in death by both of his parents Dominic and Regina Larcara and also by his sister Marie and his twin brother Leonard Larcara and his wife, Connie. A graveside memorial service is planned for Saturday, April 23, 2022, at 2:00pm at Forest Lawn East in Matthews, NC. In lieu of flowers, donations may be made to Charlotte Arts and Science Council at artsandscience.org or Save the Children – Ukraine at www.savethechildren.org.

James R. Larcara, 88, of Matthews, NC passed away Thursday morning, April 21, 2022. James was born on October 24, 1933 in Passaic, NJ to the late Dominic and Regina Larcara. He attended Seton Hall University in South Orange, NJ, then on to Traphagen... View Obituary & Service Information

The family of James R. Larcara created this Life Tributes page to make it easy to share your memories.

Send flowers to the Larcara family.