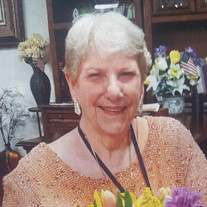 Janet Carolyn (Gossel) Brownlee June 1, 1937 – October 16, 2021 Mrs. Janet Carolyn (Gossel) Brownlee, 84, passed away peacefully amongst her family on October 16, 2021 at Cadence Senior Living in Mint Hill, NC. Jan, a devoted mother, grandmother and great-grandmother was born June 1, 1937, in Flint, Michigan, to Robert Frederick and Ruby Edith (Runnels) Gossel. She spent her entire childhood in Flint, graduating from Flint Northern High School in 1955. Shortly after graduation, Jan married Robert Brownlee, Sr. and they continued to live in the Flint area. Bob and Jan raised three children, spending 5 years in Perry, Michigan, and over 20 years in Reese, Michigan. In 1987, Bob and Jan followed two of their children to North Carolina, settling in Mint Hill, NC, where they spent what Jan called, “the best years of their lives.” As a child Jan loved to go with her mother to the beauty salon and was fascinated by all she observed. Many years later she fulfilled a dream of becoming a beautician, graduating from beauty college at the top of her class. She owned and operated Jan’s Cellar Salon in Reese, Michigan, for 14 years. After moving to Mint Hill, she and daughter Rhonda partnered in a home cleaning business for another 12 years, before retiring in 2000. Jan’s greatest love was music – beginning as a 5-year-old watching her brother play piano – and continuing into her 80s, playing piano for her friends at Willow Grove Independent Living in Matthews, NC. In between she sang and played for countless church choirs and events. She passed on that love of music to her children – and her musical legacy is now woven into all following generations, surpassing her own accomplishments with many accolades and awards to their credit, scholastically and even professionally – and Jan couldn’t have been prouder! Jan is survived by her sons Bob Brownlee, Jr. and Denny Brownlee (Sandy), and her daughter Rhonda Jaynes (Melvin). She was pre-deceased by her husband of 59 years, Bob Brownlee, Sr., and by her daughter-in-law Sue Brownlee. She leaves two grandchildren, Angela Ponzetti (Pete); and Jeff Brownlee (Beth), and six great-grandchildren: Gabriel Ashley, Caleb Ashley, Rocco Ponzetti, Dominic Ponzetti, Aliyah Brownlee and Juliana Brownlee. She is also survived by her brother-in-law Ralph Oberholtzer, sisters-in-law Esther Gossel and Edith Campbell, and many nieces and nephews and their families. The family wishes to express special thanks to those who were so helpful in taking care of Jan in her last difficult days. To Harriet, Destinee, and the staff at Cadence Senior Living for their loving care. Also, many thanks to Bobbie Jo and her staff at Hospice of Charlotte. Very special thanks to Pastor Scott Ireland, Music Minister Scott Farrell, the choir, and loving church family at Stallings UMC. Your lovingkindness has helped immensely in preparing Jan to meet her Savior. In lieu of flowers, the family requests donations be considered for the following: Stallings United Methodist Church St. Jude’s Children’s Hospital Hospice of Charlotte

The family of Janet Carolyn Brownlee created this Life Tributes page to make it easy to share your memories.

Send flowers to the Brownlee family.