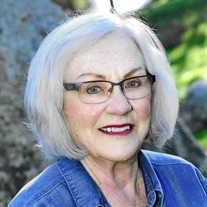 INDIAN TRAIL, N.C. — It is with great sorrow that we announce the passing of Janice Lavada Binetti on January 5, 2022. Jan was born August 7, 1936, in Marshall, AR, to Eual Griffin and Mildred Griffin. She lived in Marshall until the family moved to San Francisco, CA. Jan met her husband Rod Mario Binetti and they were married in January 1957. Rod was drafted into the Army shortly after their wedding and returned home in February 1959. Their daughter Sharon was born 10 months later and their son Ray was born in 1962. Jan was a homemaker and worked part time as a bank teller for several years while her children grew up. She could do anything she set her mind to, from painting, carpet laying, hanging wallpaper to wood working, crafting and decorating. Rod and Jan were married 45 years until Rod passed in June 2002 from multiple myeloma. The two shared a dedication to their family and each other. They enjoyed traveling to all parts of the country in their motor home. Jan enjoyed spending time with family and friends. She will be dearly missed by her daughter, Sharon Loney; son-in-law, Carl Loney; son, Ray Binetti; grandchildren, John Pavia and Thomas Loney; brother, Willis Griffin; and niece, Terri Ginochio; cousins, and close friends. Jan was preceded in death by her father, Eual Griffin; mother, Mildred Griffin; and husband, Rod Mario Binetti. Most importantly, Jan accepted Jesus Christ as her Lord and Savior shortly after her diagnosis of cancer this year. She was later baptized and provided encouragement and hope to her family and friends. Her family would like to thank Hospice and Palliative Care, Charlotte Region and Lancaster County for their compassionate care of Jan. A celebration of Jan’s Life will be held on Friday, January 7 from 3 p.m. to 5 p.m. at Heritage Funeral Home, 3700 Forest Lawn Drive, Matthews, NC 28104. A memorial service will be held at the Sacramento Valley VA Cemetery in Dixon, CA at a later date where she will be laid to rest with her husband. In lieu of flowers, donations may be made to Providence City Church to be used to help missionaries bring the message of Jesus to the lost.

INDIAN TRAIL, N.C. &#8212; It is with great sorrow that we announce the passing of Janice Lavada Binetti on January 5, 2022. Jan was born August 7, 1936, in Marshall, AR, to Eual Griffin and Mildred Griffin. She lived in Marshall until the... View Obituary & Service Information

The family of Janice Lavada Binetti created this Life Tributes page to make it easy to share your memories.

INDIAN TRAIL, N.C. — It is with great sorrow that we announce...

Send flowers to the Binetti family.