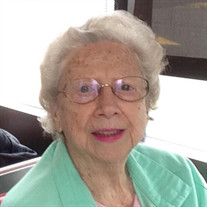 Janice Olene Harris Ellington, 88, died suddenly on Friday, November 26, 2021, with her son John holding her hand, at Stanley Total Living Center, where she had resided since March of this year. Born April 29, 1933, in Wilkes County, NC, she was a daughter of Velta Lafayette Harris and Lola Alma Foster Harris, youngest, and last surviving of their four children. She grew up in the Mt. Pleasant community of Wilkes County and the Mount Pleasant Baptist Church where she made her profession of faith and was baptized into church membership. The Harris Family moved to Charlotte, NC in 1944, first living in north Charlotte and eventually settling in the Derita Community. Janice attended and graduated from Derita High School with the Class of 1951. Janice and John Robert (Jack) Ellington were married February 7, 1953 at Whiting Avenue Baptist Church and were happily married, most of the time, for 65 years before his death June 6, 2018 at age 83. He was a native of Charlotte and only child of the late Luther Walter Ellington and Mary Allie Snoddy Ellington. The couple lived in the Derita Community for many years where they raised three sons. Their eldest, Robert Earl (Bobby) Ellington, who preceded both of his parents in death on November 8, 2014 at age 51. After the Harris Family moved to Charlotte, they all became members of Whiting Avenue Baptist Church December 15, 1946 (known at that time as North Charlotte Baptist). They were all very active in numerous leadership roles for many years. Janice had a beautiful singing voice and sang in the church choir there and in a family quintet. She also taught Training Union, Children’s Choir and Vacation Bible School and played 3rd base on the Women’s Softball Team, well into her 50’s. Janice and Jack moved their church memberships to University Hills Baptist Church in the mid 90’s and were active members of the Lewis Walker Sunday School Class. After moving from Derita to the Lake Wylie area, they became members of Berryhill Baptist Church. At the time of her marriage, Janice was employed as clerk typist with Hardware Mutual Fire Insurance Company of the Carolinas, located in Charlotte. She became a full time homemaker when Bobby was born and later worked part-time at the University of North Carolina-Charlotte (UNCC) and with the Sears & Roebuck Company at both Eastland and Southpark Malls. She was a favorite aunt of the family – taking the kids to movies, playing ball and any other activity they would ask of her. She also enjoyed monthly outings with the Derita High Class of ‘51 Lunch Bunch. In addition to her husband and son, Janice was preceded in death by her father who died August 5, 1991 at age 86 and her mother who passed away September 27, 1992 at 88 years of age. She was also preceded in death by her three older siblings and their spouses: Hoyt Cleon Harris and Peggy Jean Pope Harris, Inez Alma Harris Crowell and Jesse Grady Crowell, Alton Foster Harris and Shirley Ann Adams Harris, one nephew, Glenn Ronald Crowell and one niece, Patti Pauline Harris Norris. Surviving are sons, John (Johnny) Mark Ellington and wife, Angela Christian Ellington and David Lee Ellington; three grandsons, James David Ellington (Lo), Jake Alexander Ellington (Karissa) and Jason Lee Ellington; one great-grandson, Fischer (James and Lo); five nieces and five nephews, their spouses, children, grandchildren and numerous cousins. The family will receive family and friends at Berryhill Baptist Church, 9801 Walkers Ferry Road, Charlotte, NC 28214 on Saturday, December 4th at noon. The Memorial Service will be held at the church at 1 p.m. with Dr. Michael Gene Toney, Pastor of Music and Worship at University Hills Baptist Church, officiating. Memorials may be made to: Stanley Total Living Center, where the staff took such good care of her in her last days. Stanley Total Living Center, 514 Old Mount Holly Road, Stanley NC 28164

Janice Olene Harris Ellington, 88, died suddenly on Friday, November 26, 2021, with her son John holding her hand, at Stanley Total Living Center, where she had resided since March of this year. Born April 29, 1933, in Wilkes County, NC, she... View Obituary & Service Information

The family of Janice Harris Ellington created this Life Tributes page to make it easy to share your memories.

Send flowers to the Ellington family.