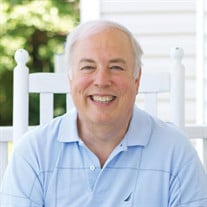 Jeffrey D. Clayton, dearly loved husband, father and grandfather, passed from this life to the next on January 1, 2022. He was born in Lebanon, IN, on April 4, 1955. He married his high school sweetheart, Jan, in 1976, who survives with three children and six grandchildren: Justin (Meaghan) Clayton of Apex, NC, and their three children; Jeremy (Julia) Clayton of Matthews, NC, and their three children; and Joni (Vaughn) Volious of Columbia, SC. A second precious daughter, Janelle, preceded him in death. Also surviving are parents Charles and Dora Clayton of Charlotte, NC, and sister Terry (Mark) Geisler of Matthews, NC. After graduating summa cum laude from Bowling Green State University in 1977 with a double major in information systems and accounting, Jeff was hired by IBM in Peoria, IL. He left IBM for two years when he moved his family to Winston-Salem in 1981 but was rehired by IBM's Charlotte office in 1983 where he continued a long and distinguished career of over 40 years. During that time, Jeff won many awards for technical and sales excellence and consulting achievements including multiple Systems Engineering Symposiums, IBM Leadership Awards, and Golden Circles. His last and perhaps favorite position was serving as Executive IT Architect for financial payments systems that involved worldwide consulting and global speaking engagements. Additionally, he served on IBM’s IT Architect Certification Board for the Americas for several years and co-authored and professionally published an article in the Journal of Payments Strategy and Systems in 2012. Although Jeff engaged in scholarly pursuits, he cared even more about people. He served as elder of Christ Covenant Church in Matthews for many years because he loved to help, encourage and pray for people. He took time to get to know every co-worker and sought to stay abreast of what was going on in the lives of neighbors. While it only took one hour to mow the lawn, Jeff often spent hours completing the task because he stopped to talk to every neighbor that he saw outside! For many years he also helped people with computer problems or technology issues. Whether leading Bible studies or teaching Sunday school, he was known for saying, “People don’t care how much you know until they know how much you care,” and his life exemplified this. Jeff was treasured by the family for his wise scriptural counsel, his faithfulness as a husband and father, the way he gave God praise for any good accomplished by him, his eagerness to read and play games with the grandchildren, and his quick wit. It was not uncommon for the family to be laughing until their sides hurt at family birthday parties because he helped everyone to see the humor in countless situations. Always a technician, Jeff enjoyed the “magic” of technology. He once built a computer from scratch and was known for rigging up numerous house lights on voice command. He also loved learning photography techniques and frequently had photo competitions with Jan to see who could capture the best photo of the places they traveled. Exploring new places with Jan was a favorite pastime and part of his dream for retirement. What Jeff was most passionate about, however, was sharing with others how they can have a personal relationship with the God of the universe through his Son Jesus. He often exhorted friends and new acquaintances to read the book of John in the Bible where the Author of Life could speak for himself. Talking with agnostics and atheists was something he loved to do because he believed they had never considered the abundant evidence which makes following Christ a reasoned decision, often citing points from the books More Than a Carpenter and I Don’t Have Enough Faith to be an Atheist. Jeff was known for saying that people tend to focus on the first 100 years of their lives on earth without giving thought to the trillion plus years they will be living after death. As friends and family frequently heard him say, “For those who place their faith in Christ, the best is yet to come!” Please join the family in celebrating Jeff’s life, Saturday, January 29, 2022, at 3 p.m. at Christ Covenant Church, 800 Fullwood Lane, Matthews, NC. A receiving line for the family is planned from 1:00 to 2:30 p.m. prior to the service. In lieu of flowers, donations may be given to CO SERVE, an organization building Christian leaders on college campuses internationally, using the online link of https://www.campusoutreach.org/donate/build-gospel-leaders/ or by mailing a check to: Campus Outreach SERVE, Dept. #485, PO Box 4458, Houston, TX 77210-4458. Alternatively, the family suggests donations to the International Justice Mission which rescues and restores the oppressed around the world and strengthens justice systems at http://www.ijm.org.

Jeffrey D. Clayton, dearly loved husband, father and grandfather, passed from this life to the next on January 1, 2022. He was born in Lebanon, IN, on April 4, 1955. He married his high school sweetheart, Jan, in 1976, who survives with three... View Obituary & Service Information

The family of Jeffrey D. Clayton created this Life Tributes page to make it easy to share your memories.