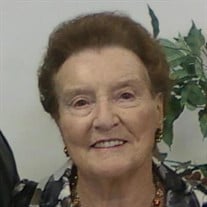 Joan Mary Verryt, 94, passed away peacefully at her home in Monroe, North Carolina, on May 25, 2021. One of nine children, she was born Johanna Godefrieda Maria Elisabeth Knippenberg to Johannes Knippenberg and Maria van Veldhoven in Rijswijk, The Netherlands, on May 15, 1927. She married Johannes (John) Antonius Aloysius Verrijt (Verryt) in April of 1952. The pair emigrated from Rijswijk, The Netherlands, in 1956 to the New England area of the United States, where they spent their life until retiring to Matthews, North Carolina, in 1985. She is predeceased in death by her husband of 57 years, John; and survived by her younger brother Josephus Knippenberg and wife Ingeborg of South Carolina; 4 children: Edward and wife Anne of New Hampshire, Hans and partner Denise of Washington, Karen and husband Gilberto of North Carolina, and Raymond and partner Kim of New Hampshire; 9 grandchildren: Heather Smith and husband Ken, Michael Wills, Alex Verryt and wife Michelle, Jason Wills, John Verryt and wife Becky, Heidi Wills, Kara Minter and husband Brad, Justin Verryt, and Christopher Verryt and wife Raynee; and 15 great-grandchildren. Her surviving extended family also includes many nieces and nephews residing in The Netherlands and around the world. She served as a court reporter during the military tribunal in The Hague, Netherlands, for war criminals after WWII, and she worked as a legal secretary, CCD teacher, and homemaker throughout her life. She enjoyed traveling, knitting and sewing, gardening, entertaining family and friends, and watching Jeopardy and Wheel of Fortune in the evenings. She was an avid charity supporter for disabled veterans and disadvantaged children. She also enjoyed keeping up with family and friends on social media and starting her day by reading the morning newspaper over breakfast.

Joan Mary Verryt, 94, passed away peacefully at her home in Monroe, North Carolina, on May 25, 2021. One of nine children, she was born Johanna Godefrieda Maria Elisabeth Knippenberg to Johannes Knippenberg and Maria van Veldhoven in Rijswijk,... View Obituary & Service Information

The family of Joan Mary Verryt created this Life Tributes page to make it easy to share your memories.

Joan Mary Verryt, 94, passed away peacefully at her home in Monroe,...

Send flowers to the Verryt family.