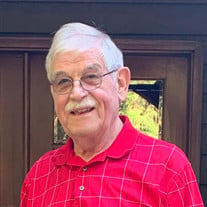 Johannes Christiaan Hyacinthus Rief, passed away in his home on April 22nd, 2022, at the age of 79. He was always so kind, giving and selfless, ready to help, and concerned about making our country the best it can be. Johannes was born on September 6, 1942, in Nijmegen, the Netherlands. After graduating from high school, he served as an engineer for the Royal Dutch Navy for 4 years. He went on to study mechanical engineering, and upon graduation, took his first job at Stork Screens where he stayed for over 35 years. In 1967, he met Marina while on a work assignment in Bogotá, Colombia. They wed in 1969, going on to have four children, Jan, Monica, Stefan and Patty. After 11 years working for Stork in Brazil, he was given an opportunity to transfer to the USA, where the family moved to Charlotte, NC permanently. He retired from Stork, and then went on to work for Machine Builders as a consultant for another 15 years, where he used his extensive knowledge of languages– fluent in six. Johannes spent his free time volunteering as an usher at his church, woodworking, gardening, joking about his ‘honey do’ list, running errands, enjoying lunch outings with his wife and spoiling his seven grandchildren as much as possible. Johan was also an avid reader, sometimes reading thick German novels. He loved discovering new books at the bookstore. Johan was the President of the University City Rotary Club from 1995 - 1996, a member of The Knights of Columbus as a Fourth Degree Knight, and had been involved with several building campaigns. After growing the Boy Scout troop at St. Gabriel Catholic Church, he started the Boy Scout Troop 8 at St. Matthew’s. Boy Scout Troop 8 is now one of the largest troops in the country. Johannes has continued work with the scouts throughout the years and was the Chartered Organization representative. He said that the most rewarding aspect has been to watch a little boy start as a Cub and make it to the Eagle Scout and see him turn into a fine young man. Along with his wife Marina, he was one of 12 founding members of St. Matthew Catholic Church. Johannes is preceded in death by both his parents Josephina and Gerardus, his sister, Liesbeth and his brother, Sep. He is survived by his loving wife Marina, along with their two sons (Jan, Stefan) and two daughters (Monica and Patty); their spouses (Sonia, Jenny, Jamey); his grandchildren Ian, Ana, Owen, Nathan, Emma, Jean Luk, and Giselle, sister (Marie Jose), many nieces and nephews, and an abundance of friends. Johannes will be remembered for his devout Catholic faith, love of travel, generosity, selflessness, conviction, boisterous laugh and his appetite for food and life. Everyone who knew Johan knew how special he was. Johan was full of life and joy, traits that were obvious to all after even just a single meeting with him. We will miss him more than words can say. A Funeral Mass will be held at St. Matthew Catholic Church on Tuesday, May 3rd, at 11 AM. Johannes will be laid to rest in the Columbarium at St. Matthew Catholic Church, following the Mass. In lieu of flowers, please consider a donation to the Knights of Columbus at St. Matthew Catholic Church, Council No.10852 in Charlotte, NC. Email the Council Treasurer directly at Tom Larkin at [email protected], for more information.

Johannes Christiaan Hyacinthus Rief, passed away in his home on April 22nd, 2022, at the age of 79. He was always so kind, giving and selfless, ready to help, and concerned about making our country the best it can be. Johannes was born on September... View Obituary & Service Information

The family of Johannes C. H. Rief created this Life Tributes page to make it easy to share your memories.

Johannes Christiaan Hyacinthus Rief, passed away in his home...