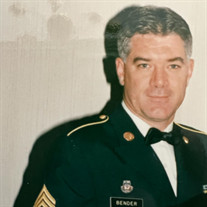 Wesley Chapel, N.C. – A Burial Ceremony will be celebrated at 12:00 pm on Monday, May 2nd, 2022, at Forest Lawn East Cemetery, for John (Jack) Jacob Bender Jr, 67, who passed away on Thursday, April 28th, 2022. A lifelong resident of many locations, Jack was born on August, 17th, 1954 in Newport, RI to Alice Bender and the late John Jacob Bender Sr. He proudly served our country in the United States Army as a Master Sergeant in the 4th Battalion, 69th Armor division for 20 years, then retired. After retiring from the Army he relocated to North Carolina and worked as a Sales Engineer for CCA corporation for 8 years before retiring to his home in Wesley Chapel, NC. Jack was raised in the Catholic church, serving as an altar boy. He enjoyed spending time with his family and friends, recording and archiving live music, planting trees and cooking. He was an avid hunter, fisherman and loved to go camping. He was passionate about NASCAR racing and riding his Harley Davidson. He is survived by his wife of 46 years, Laurie R. Bender of Wesley Chapel; daughter, Kristine Mahoney (James); son, Samuel Bender (Natalia); Alexander Bender; mother Alice Bender; grandchildren, Kayla Mahoney; Sara Mahoney; Samuel Jacob Bender; brothers, James Bender, Robert Bender, Martin Bender, sisters, Patricia Guy, Katherine Hazlett, Nora Bender, Susan Syzmendera. In addition to his father, he was preceded in death by his brother, Thomas Bender.

“Be Sensible and do sensible things”

Wesley Chapel, N.C. – A Burial Ceremony will be celebrated at...

Send flowers to the Bender family.