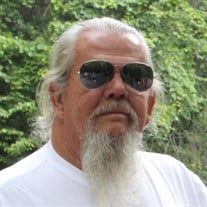 John Terry Brown, 76, passed away September 21, 2021 with his wife by his side. Born in Rock Hill, SC in 1944, Terry was a lifelong resident of Pineville, NC. He was a Harley Davidson Motorcycle fanatic and collector, with antique servicars his main passion. He was a lifetime member of the Concerned Bikers Association (CBA), serving as President of the Charlotte chapter for several years. He was also the Bike Show Director of the CBA Swap Meet and Bike Show for over 30 years. Terry was a member of the Boozefighters M/C, Chapter 9 for 16 years, serving as Secretary and Treasurer. Mention Moody, AL to a Boozefighter. The stories will flow. He was a founding member of the Catawba Valley Chapter of the Antique Motorcycle Club of America. He loved all his motorcycle brothers, some of whom he was friends with for more than 50 years. Earlier in life, Terry ran the Columbus Oil Station in Pineville for years, where he also operated a motorcycle painting business. That corner at the red light in Pineville was always full of motorcycle activity and was the backdrop of many of the stories he loved to tell. Several of his motorcycle paint jobs were featured in Easy Rider Magazine -- a great source of professional pride for Terry. He later became a service technician for Precision Beverage, retiring after nearly 20 years. Terry's family was his first priority. He liked to act like a hard ass on the outside but he was a big-ole teddy bear on the inside who wholeheartedly loved his family. Always taking some of his grandkids with him to run his errands, making sure we had family lunch once a week, and no matter how busy he was, he always had time to sit and tell stories of “the good old days.” Terry was known for his fierce loyalty and directness that left no questions about where people stood with him. Terry was a Pineville fixture for decades. His favorite spot was the shop in his backyard where friends and family were always welcome. Terry’s interests didn’t stop with family and motorcycles. He was an avid history buff. He was very knowledgeable with his history and loved to stir up “discussions” particularly about the Civil War. All of his Yankee friends have been subjected to Terry’s facts and opinions. He had a very loyal bond with his Southern roots. Terry also loved to visit old cemeteries. He would gather the family and say “Let’s go see this cemetery I ran across while riding last week.” Everybody went. Terry and Debby celebrated their 50th anniversary in February. They had completely different interests but made sure they shared their interest with each other. Since Debby retired they have been taking day trips to the mountains to view waterfalls and small towns and had been looking forwards to many more. They had a marriage built on love, strong trust and devotion to one another. He was preceded in death by his parents, JC and Pat Brown and grandson, Maxwell Wise. He is survived by his wife of 50 years Debby Brown; his children, Adrian Brown, Chris Brown, and Kelly Wise (Lane); grandchildren, Megan, Maddie, Mason, Matthew, McKenzie, Molly, Maggie, and Millie; great-grandchildren Brantley and Harper-Lynn; sister Patsy Presnell (Dallas), and a niece and nephew. Terry’s life story isn't complete without mentioning the love and devotion he had for the many dogs that were his companions throughout life, most recently Winchester, Wally and Gracie. In lieu of flowers the family requests donations be sent to Hospice and Palliative Care - Charlotte Region, PO Box 470408, Charlotte, NC, 28247.

John Terry Brown, 76, passed away September 21, 2021 with his wife by his side. Born in Rock Hill, SC in 1944, Terry was a lifelong resident of Pineville, NC. He was a Harley Davidson Motorcycle fanatic and collector, with antique servicars... View Obituary & Service Information

The family of John Terry Brown created this Life Tributes page to make it easy to share your memories.

Send flowers to the Brown family.