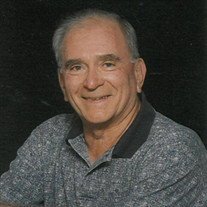 John Kuvinka, III, “Mr. Fix-it” John Kuvinka, age 93, beloved husband, father, and grandfather, died February 14, 2022 at Brookdale South Charlotte Senior Living Center. He was a resident of Charlotte, N.C. since 1985. Born February 25, 1928 to John Kuvinka Jr. and Helen Plakinger Kuvinka in Monessen, Pennsylvania, he was raised in Yonkers, New York where he attended Saunders Trade and Technical School. He served in the United States Merchant Marines from 1944-1946. He married his wife, Marianne Oliveira June 20, 1948 at St. Mary Catholic Church in Yonkers, New York. After being employed at Stevens Buick for 13 years, he operated his own business, Park View Service Station in Hastings-on-Hudson, New York for 19 years. Upon retiring at age 53, he relocated to Charlotte to be near his daughter and her family. A man of exceptional mechanical ability, he was always ready to be of assistance to family, friends, and neighbors through his business and beyond. An avid golfer at Raintree Country Club, he was an OMEGA member for 20 years. He is survived by his wife Marianne, to whom he was proudly married for 73 years, his beloved daughter, Karen Kuvinka Rubbo, son-in-law Michael F. Rubbo, much loved grandson Michael A. Rubbo, with his wife Corrina and great-grandson, Logan. He was predeceased by his brother Conrad Kuvinka of San Dimas, California. A private funeral will be held at Forest Lawn East Cemetery in Matthews, North Carolina, with a memorial service to be held in the future. In lieu of flowers, donations can be made in John’s name to Hospice & Palliative Care, Charlotte Region. An online guestbook is available at www.heritagecares.com and provided by Heritage Funeral Home, Weddington Chapel.

The family of John "Mr. Fix-it" Kuvinka created this Life Tributes page to make it easy to share your memories.

Send flowers to the Kuvinka family.