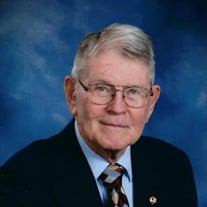 In Loving Memory of: John (Jack) Andrew Russell, Jr. May 29, 1926-Feb. 24, 2022 John (Jack) Andrew Russell, Jr. died peacefully at the age of 95 at the Levine and Dickson Hospice House in Charlotte, NC on February 24, 2022. He was born in Washington DC on May 29, 1926, as the only son of John Andrew and Margaret Beverage Russell and brother of Marianne Russell Kendrick. He will be fondly remembered by family and friends for living a full life as a very loving and caring husband, father, grandfather and great grandfather, by serving his country in the Navy, serving his country again at Oak Ridge National Laboratory as an Electrical Engineer, giving back to the community through many volunteer organizations, participating in many fun and interesting hobbies and by setting a great example for others to follow throughout his life. Jack graduated from Woodrow Wilson High school in Washington DC in 1944, served two years in the US Navy during WW II attaining the rank of Electronic Technicians Mate 2/C, graduated from the University of Maryland in 1951 with a BS in Electrical Engineering. Upon graduation he worked for the National Bureau of Standards in Washington DC. On June 12, 1951, he married Betty Louise Colbert at the National Presbyterian Church in Washington DC. In 1954 they moved to Oak Ridge, TN as Jack moved to a job at the Oak Ridge National Laboratory (ORNL) as an instrumentation and control systems engineer. One of Jack’s most important accomplishments was as the designer of a major portion of the controls for ORNL’s ORIC Cyclotron, which is still in operation today. He was also involved in the design of safeguard and security instrumentation at the local plants. Jack was actively involved for several years on the executive committee of the Carnahan Conference on Security Technology at the University of Kentucky and in 1981 he was commissioned a Kentucky Colonel by the Governor. He served for 24 years as a member and chairman of the ORNL Laboratory’s Accelerators and the Radiation Sources Review Committee and was presented a Distinguished Service Award by them upon his retirement in 1991. Throughout his life Jack was a very active member of The National Presbyterian Church in Washington DC, First Presbyterian Church and The Chapel on the Hill in Oak Ridge, TN, and in the recent years, the worship services at Matthews Glen in Matthews, NC. Jack was active in Boy Scouting in his youth, for most of his life serving as an assistant scoutmaster, serving on the National Capitol Area Council, the Pellissippi District and Great Smoky Mountain Council Boards and chairman of the district Eagle Board of Reviews. In 1972 he was awarded the Silver Beaver award for distinguished service to Boy Scouts. Professional activities included the Instrument Society of America and the ASTM (American Society for Testing and Materials). He also was elected to the Oak Ridge Board of Building Code Appeals in 1967 where he served continuously until his move to Charlotte, NC in 2014. After retirement he volunteered his services building homes in Eastern TN with Habitat for Humanity and repaired existing homes with Aid to Distressed Families of Appalachian Counties (ADFAC), stopping only after needing to care for his wife. Jack enjoyed numerous hobbies and was a very active member of several organizations including ham radio (W4JMG), the Oak Ridge Amateur Radio Club, woodworking, furniture making, automobile repairs, electrical repairs, mechanical repairs, photography, and hiking. Jack especially enjoyed sailing, racing his Thistle sailboat at Concord Yacht Club in Knoxville, TN and in regattas around the Southeast. Jack and Betty also enjoyed overnight sailboat cruises on the TVA lakes and in the Caribbean Islands. He had a passion for introducing others to this fascinating sport. Some of these endeavors included helping organize the Concord Yacht Club’s youth Sail Camps, and teaching sailing at the Oak Ridge Power Squadron where he was a Senior Navigator and Life Member. He was preceded in death by his parents, his wife Betty Louise Russell, their daughter Rebecca (Becky) Louise Carrico, and his sister Marianne Russell Kendrick and her husband Lawrence Kendrick. Loving survivors are their sons John Andrew (Andy) Russell III and wife Derlaine Barker Russell (Charlotte, NC) and Daniel (Dan) Colbert Russell and wife Kathryn (Kat) Rinker Russell (Cary, NC); his son-in-law Richard (Rick) Anthony Carrico and wife Kathleen (Kathy) Stagon Carrico (Glasgow, KY); along with seven grandchildren, Kimberly Marie Carrico Chef (OH), Jennifer Carrico Beck (KY), Bradford Andrew Russell (NC), Camden Russell McCormack (GA), Thomas Daniel Russell (NC), Margaret Ann Russell (NC), and Anna Kathryn Russell Rocker (NC) as well as eight great-grandchildren. Services will be at the Matthews Glen retirement community at 733 Pavilion View Dr. Matthews, NC at 11:00am on March 12, 2022, with the Chaplin Sara Spahr Stubbs officiating with graveside services at Oak Ridge Memorial Park in TN later this spring. In lieu of flowers it is requested that contributions be made to Aid to Distressed Families of Anderson County, PO Box 5953, Oak Ridge, TN 37831; Keystone Adult Day Care, 1350 Oak Ridge Turnpike, Oak Ridge, TN 37830; or another charity of the donor’s choice.

The family of John "Jack" Andrew Russell Jr. created this Life Tributes page to make it easy to share your memories.